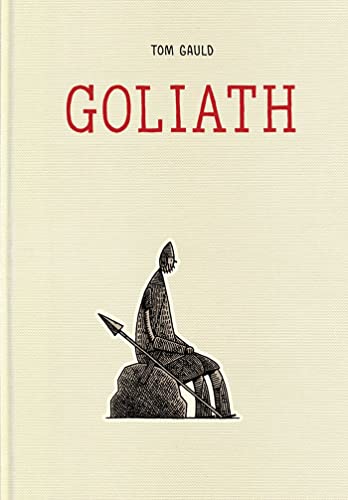 A master of stripped-down, powerful storytelling reworks the David-and-Goliath myth
"Gauld's Goliath is a master class in reduction...a celebration of the Christian underdog becomes a subtle meditation on the power of spin and the absurdity of war."–The Times of London

Goliath of Gath isn't much of a fighter. Given half a choice, he would pick admin work over patrolling in a heartbeat, to say nothing of his distaste for engaging in combat. Nonetheless, at the behest of the king, he finds himself issuing a twice-daily challenge to the Israelites: "Choose a man. Let him come to me that we may fight. If he be able to kill me then we shall be your servants. But if I kill him, then you shall be our servants." Day after day he reluctantly repeats his speech, and the isolation of this duty gives him the chance to banter with his shield-bearer and reflect on the beauty of his surroundings.

This is the story of David and Goliath as seen from Goliath's side of the Valley of Elah. Quiet moments in Goliath's life as a soldier are accentuated by Tom Gauld's drawing style, which contrasts minimalist scenery and near-geometric humans with densely crosshatched detail reminiscent of Edward Gorey. Goliath's battle is simultaneously tragic and bleakly funny, as bureaucracy pervades even this most mythic of figures. Goliath displays a sensitive wit, a bold line, and a traditional narrative reworked, remade, and revolutionized.

Tom Gauld lives in London. His comics frequently appear in The Guardian, and his illustrations have appeared in The New York Times. He has designed a number of book covers.

“Gauld's Goliath is a master class in reduction...a celebration of the Christian underdog becomes a subtle meditation on the power of spin and the absurdity of war.”―The Times

“Gauld’s sparse style captures the encroaching ennui of Goliath beautifully...Gauld infuses a parable with new meaning for a modern world, with a helping of melancholy but sweet humour to boot.”―National Post

“Quick to read but easy to consider and reconsider, the humor and pathos in Goliath’s worldview requires longer thought... An eminently discussable graphic novel.”―School Library Journal

“Working with cartoony figures, silhouettes, and finely cross-hatched close-ups, Gauld captures the bleakness of the landscape, and how what looks like an insignificant pebble from far away can become hugely important when it’s landing right between the hero’s eyes.”―AV Club

“Gauld’s stripped-down drawings, all boulders and blank faces, are perfect for his bittersweet tale, and the book itself is a lovely addition to any shelf.”―Flavorwire

“Tom Gauld’s new comic-book, starring Goliath as an unassuming army admin clerk pushed into a situation he neither wants nor understands is a work of depth, pathos and beauty, with the sublime craftsmanship anyone who knows Gauld’s work would expect.”―It's Nice That