Items related to Black Farce and Cue Ball Wizards: The Inside Story...

Everton, Clive Black Farce and Cue Ball Wizards: The Inside Story of the Snooker World

Black Farce and Cue Ball Wizards: The Inside Story of the Snooker World 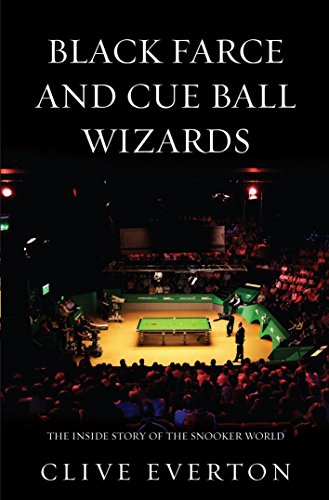 Throughout its checkered history, snooker has had more than its fair share of heroes and villains, champions and chumps, rascals and rip-off artists. In the last 25 years, every sleazy scandal imaginable has attached itself to this raffish sport: corruption, match fixing, bribery, sex, recreational drugs, performance-enhancing drugs, ballot rigging, fraud, theft, domestic violence, common-or-garden violence, paranoid politicking, dirty tricks—all against a background of inept petty tsars fixated on the pursuit, retention, and abuse of power. Here, Clive Everton recounts the glory and despair, the dreams and disillusion, and the treachery and greed that have characterized the game since it was invented as an innocent diversion by British Army officers in India in the 19th century. He tells the true and unexpurgated tale of snooker's transformation into a television success story second only to football, and exposes how its potential has been shamefully squandered.

Clive Everton is the BBC's senior snooker commentator. He has published and edited Snooker Scene magazine since 1971 and has been snooker correspondent for the Guardian since 1976.

"Revelatory stuff, masterfully written (Book of the Week)" * Independent on Sunday * "A terrific memoir-cum-history of the game . . . great matches are writ large but there is so much else. Fraud. Theft. Violence. In fighting. Back biting. Madness." -- Nick Harris * The Independent * "An extraordinary tale of intrigue and perilous financial survival" -- Donald Trelford * Daily Telegraph * "My own surprise of the year: reading, spellbound, at one sitting an unputdownable 400-page revelation - on snooker" -- Frank Keating * The Guardian * "This expose of the game's development and its somewhat Machiavellian underbelly is written with authority by esteemed commentator Clive Everton" * Publishing News *

1. Black Farce and Cue Ball Wizards: The Inside Story of the Snooker World

Book Description Mainstream Publishing, 2012. Paperback. Condition: Used; Good. Dispatched, from the UK, within 48 hours of ordering. This book is in good condition but will show signs of previous ownership. Please expect some creasing to the spine and/or minor damage to the cover. Aged book. Tanned pages and age spots, however, this will not interfere with reading. Seller Inventory # CHL5875871

2. Black Farce and Cue Ball Wizards: The Inside Story of the Snooker World