Items related to The Finest Wines of Germany: A Regional Guide to the...

Stephen Reinhardt And Jon Wyand The Finest Wines of Germany: A Regional Guide to the Best Producers and Their Wines

The Finest Wines of Germany: A Regional Guide to the Best Producers and Their Wines 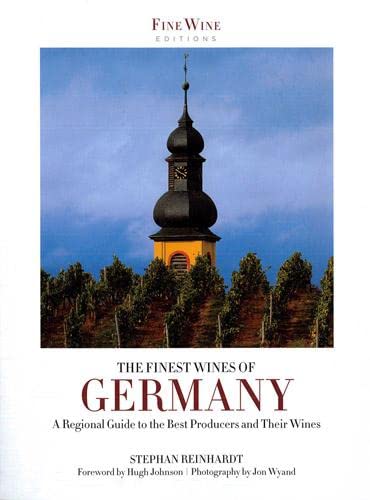 Focusing on one of the twenty-first century' s most exciting and innovative wine producing regions, this edition covers the most majestic of Rieslings, lesser-known varieties of Silvanor, Pinot Blanc, Pinot Gris and upcoming classics such as Pinot Noir - hailed as the new ` Red Riesling' . With a history and wine culture dating back to the Middle Ages, German wine once had a reputation for subtlety and quality; Rieslings from the Rhine, Mosel and Saar were among the most sought-after and expensive wines in the world. However, throughout the World Wars, a perception of German wine as being ` cheap and sweet' emerged - a development encouraged by the 1971 German Wine Law, which based wine categories on sugar levels. Now 100 years since the last Golden Age of German Wine, a new era of rejuvenation, innovation and variety has dawned. The author looks in depth at topics including: climate and soil, the new generation of wine growers, developments in German drinking culture, as well as considering grape varieties and viticulture. The book concludes with a profile of the most noteworthy producing regions, vineyards and a list of classic vintages.

This is arguably the best of the titles so far in the Finest Wines’ series and the best book about German wines in English for a generation.” --John Winthrop Haeger, author of North American Pinot Noir

The author’s voice is consistently engaged and enthusiastic, and his book should appeal to a general readership of wine lovers as well as to anyone with a professional interest in German wine.” --David Schildknecht, German wine authority for The Wine Advocate and the Oxford Companion to Wine

Stephan Reinhardt has been writing about German wine for more than ten years. He is the editor of the monthly German/Swiss review Weinwisser, and also contributes regularly to other publications including The World of Fine Wine, Falstaff and Effilee

1. The Finest Wines of Germany: A Regional Guide to the Best Producers and Their Wines

Shipping: US$ 4.99
From United Kingdom to U.S.A.
Destination, rates & speeds