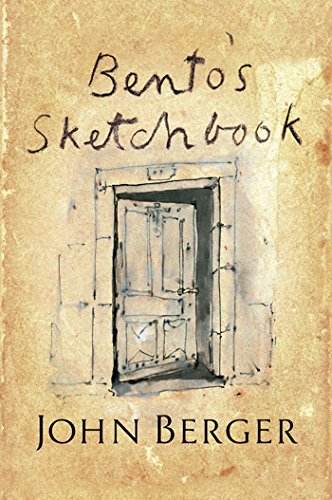 About the Author:
Storyteller, novelist, essayist, screenwriter, dramatist and critic, John Berger is one of the most internationally influential writers of the last fifty years. His many books include Ways of Seeing, the fiction trilogy Into Their Labours, Here Is Where We Meet, the Booker Prize-winning novel G, and, most recently, the Man Booker-longlisted From A to X. He lives in France.
Excerpt. © Reprinted by permission. All rights reserved.:
This autumn the quetsch plum trees are overburdened with fruit. Some have branches that have snapped under the weight. I can’t recall another year when there were so many plums.

When ripe those purple plums acquire a bloom the colour of dusk. At midday if there’s sunlight – and it has been sunny for days on end – you see clusters of them, the colour of dusk, hanging behind the leaves.

Blueberries are the only other fruit which are as blue, but their blue is dark and gemlike, whereas the quetsch blue is like a vivid but vanishing blue smoke. The clusters of four, five or six fruit grow like handfuls from small shoots of the trees’ branches. From a single tree hang hundreds of handfuls.

Early one morning I decide to draw a cluster, perhaps to understand better why I repeatedly say ‘handful’. The drawing was clumsy and bad. I begin another. Three handfuls away from the one I have chosen to draw, a small black and white snail, small as my fingernail, is asleep on the leaf it has been eating. The second drawing was as bad as the first. So I stopped and began the day’s tasks.

Towards the end of the afternoon I returned to the plum trees with the idea of trying, one more time, to draw the same cluster. Perhaps due to the change of light – the sun was no longer in the east but the west – I could not find or identify the cluster. I even asked myself whether I was under the right tree.

I moved over to the next tree, stooping under its branches, peering up. There were countless quetsch but not my handful. It would of course have been easy to draw another cluster but something in me obstinately refused. I circled under the branches of both trees again and again. And then I spotted the snail. Thirty centimetres to his left I found my cluster. The snail had changed his position but not his whereabouts. I took a good look at him.

I began to draw. I needed a green to mark the leaves. At my feet were some nettles. I picked a leaf, rubbed it on the paper, and it gave me a green. This time I kept the drawing.

Three days afterwards it was time to harvest the plums. If put in barrels to ferment for a few months, you can distil an excellent slivovitz from them. They also make good jam and are wonderful on tarts.

To harvest quetsch you either shake the tree’s boughs and many plums fall to the ground, or you climb up into the tree with a bucket and pick them by hand.

The trees have incipient thorns and a multitude of twigs. High in the tree, you have the sensation of crawling through undergrowth, proceeding from one small blue smoke ring to another, and gathering in the palm of your free hand, warm thumb after warm thumb. You can hold three or four, or five, not more. This is why I call the clusters handfuls. Inevitably some of the fruit roll down your wrist and fall to the grass.

When I was later on my knees picking up plums from the grass and dropping them into a basket, I came across several black and white snails, who had fallen unhurt to the ground with the fruit. I placed five of them side by side, and to my surprise it was easy for me to recognise the one who had been my guide. I made a drawing of him, a little over life-size.

The philosopher Baruch Spinoza (1632–1677) – generally known as Benedict (or Bento) de Spinoza – earnt his living as a lens-grinder and spent the most intense years of his short life writing On the Improvement of the Understanding and the Ethics, both of which were only published posthumously. We know from other peoples’ souvenirs and memories of the philosopher that he also drew. He enjoyed drawing. He carried a sketchbook around with him. After his sudden death – perhaps from silicosis, a consequence of his grinding lenses – his friends rescued letters, manuscripts, notes, but apparently didn’t find a sketchbook. Or, if they did, it later got lost.

For years now, I have imagined a sketchbook with his drawings in it being found. I didn’t know what I hoped to find in it. Drawings of what? Drawn in what kind of manner? De Hooch, Vermeer, Jan Steen, Gerard Dou were his contemporaries. For a while in Amsterdam he lived a few hundred metres away from Rembrandt, who was twenty-six years his elder. Biographers suggest the two of them probably met. As a draughtsman Spinoza would have been an amateur. I wasn’t expecting great drawings in the sketchbook, were it to be found. I simply wanted to reread some of his words, some of his startling propositions as a philosopher, whilst at the same time being able to look at things he had observed with his own eyes.

Then last year a Polish printer, who is a friend of mine living in Bavaria, gave me a virgin sketchbook, covered with suede leather, the colour of skin. And I heard myself saying: This is Bento’s!

I began to make drawings prompted by something asking to be drawn.

As time goes by, however, the two of us – Bento and I – become less distinct. Within the act of looking, the act of questioning with our eyes, we become somewhat interchangeable. And this happens, I guess, because of a shared awareness about where and to what the practice of drawing can lead.

I’m drawing some irises which are growing against the south wall of a house. They are about one metre tall, but, beginning to be in full bloom, they are somewhat bent over by the weight of their flowers. Four to a stalk. The sun is shining. It’s the month of May. All the snow at altitudes less than 1500m has melted.

I think these irises are of a variety called Copper Lustre. Their colours are dark crimson-brown, yellow, white, copper: the colours of the instruments of a brass band being played with abandon. Their stalks and calyxes and sepals are a pale viridian.

I’m drawing with black ink (Sheaffer) and wash and spit, using my finger rather than a brush. Beside me on the grass, where I’m sitting, are a few sheets of coloured Chinese rice paper. I chose them for their cereal colours. Maybe later I will tear shapes from them and use them as collage. I have a glue-stick if need be. There’s also on the grass a bright yellow oil pastel, taken from a pastel kit made for schoolkids with the trade-name Giotto.

The drawn flowers look as though they’re going to be half life-size. You lose your sense of time when drawing. You are so concentrated on scales of space. I’ve probably been drawing for about forty minutes, perhaps longer.

Irises grew in Babylon. Their name came later, from the Greek goddess of the rainbow. The French fleur de lys was an iris. The blossoms occupy the top half of the paper, the stems force their way upwards through the bottom half. The stems are not vertical, they lean to the right.

At a certain moment, if you don’t decide to abandon a drawing in order to begin another, the looking involved in what you are measuring and summoning up changes.

At first you question the model (the seven irises) in order to discover lines, shapes, tones that you can trace on the paper. The drawing accumulates the answers. Also, of course, it accumulates corrections, after further questioning of the first answers. Drawing is correcting. I’m beginning now to use the Chinese papers; they turn the ink-lines into veins.

At a certain moment – if you’re lucky – the accumulation becomes an image – that’s to say it stops being a heap of signs and becomes a presence. Uncouth, but a presence. This is when your looking changes. You start questioning the presence as much as the model.

How is it asking to be altered so as to become less uncouth? You stare at the drawing and repeatedly glance at the seven irises to look, not at their structure this time, but at what is radiating from them, at their energy. How do they interact with the air around them, with the sunshine, with the warmth reflected off the wall of the house?

Drawing now involves subtracting as much as adding. It involves the paper as much as the forms drawn on it. I use razor blade, pencil, yellow crayon, spit. I can’t hurry.

In fact I have to deliver the drawing tonight. I have made it for Marie-Claude, who died two days ago, aged fifty-eight, of a heart attack.

Tonight the drawing will be in the church somewhere near her coffin. The coffin will be open for those who want to see Marie-Claude for the last time.

Her funeral is tomorrow. Then the drawing, rolled up and tied with a ribbon, will be placed with live flowers in her coffin and be buried with her.

We who draw do so not only to make something visible to others, but also to accompany something invisible to its incalculable destination.

Two days after Marie-Claude’s funeral I received an email telling that a small drawing of mine – an eighth of the size of the drawing of the Copper Lustre irises – had been sold in a London art auction for Ł4,500. A sum of money such as Marie-Claude would never have dreamt of having in her hands during her entire lifetime.

The auction was organised by the Helen Bamber Foundation, which gives moral, material and legal support to people begging for asylum in Great Britain, people whose lives and identities have been shattered by traffickers of immigrants – slave traders in all but name – by armies that terrorise civilian populations, and by racist governments. The Foundatio...