Items related to A Responsibility to Awe (Carcanet Classics)

A Responsibility to Awe (Carcanet Classics) 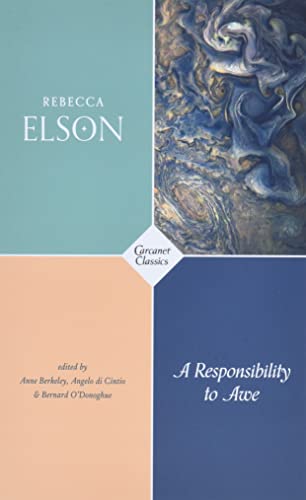 Rebecca Elson's A Responsibility to Awe reissued as a Carcanet Classic

A Responsibility to Awe is a contemporary classic, a book of poems and reflections by a scientist for whom poetry was a necessary aspect of research, crucial to understanding the world and her place in it, even as, having contracted terminal cancer, she confronted her early death. Rebecca Elson was an astronomer; her work took her to the boundary of the visible and measurable. "Facts are only as interesting as the possibilities they open up to the imagination," she wrote. Her poems, like her researches, build imaginative inferences and speculations, setting out from observation, undeterred by knowing how little we can know.

Rebecca Elson was an astronomer. Her principal work focused on globular clusters, teasing out the history of stellar birth, life and death. Born in Montreal, Quebec, of Canadian and US parents, she studied at Smith, St Andrews, and the University of British Columbia. She took her PhD at Cambridge, where she won an Isaac Newton Studentship. She started publishing poems while working at the Institute of Advanced Studies in Princeton, and researched at the Harvard Center for Astrophysics. In 1991 she returned to the Institute of Astronomy at Cambridge to work on the first Hubble data. She died in Cambridge in 1999, aged 39.

Anne Berkeley's pamphlet The buoyancy aid and other poems was published in 1997, and a selection of her work appeared in Oxford Poets 2002. She won the TLS prize in 2000 and the Avron competition in 2004. Angelo di Cintio is an Italian artist to whom Rebecca Elson was married. Bernard O'Donoghue teaches Medieval English at Wadham College, Oxford, and has published seven books of poems, including Gunpowder, which won the Whitbread Prize for Poetry in 1995.

1. A Responsibility to Awe

2. A Responsibility to Awe (Carcanet Classics)

Book Description 2018. Paperback. Condition: New. 2nd. Paperback. Rebecca Elson's A Responsibility to Awe reissued as a Carcanet Classic. A Responsibility to Awe is a contemporary classic, a book of poems and reflections by a scientist for.Shipping may be from our Sydney, NSW warehouse or from our UK or US warehouse, depending on stock availability. 160 pages. 0.206. Seller Inventory # 9781784106553

4. A Responsibility to Awe