Items related to Robin Williams: When the Laughter Stops 1951–2014 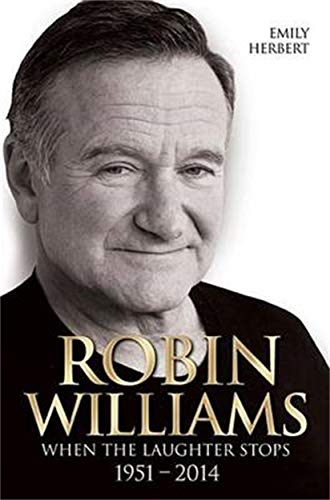 At midday on August 11, 2014, much-loved comedian Robin Williams was pronounced dead at his California home. From Mrs. Doubtfire, Jumanji, and Aladdin to Good Will Hunting and Dead Poets Society, Robin Williams brought laughter—and deep joy—to a generation. He was sparklingly funny, a lightning-fast improviser, and a wonderful comic. But what touched millions of people was the warmth and compassion he exuded. The deeply tragic manner in which he took his own life has come as a shock to the world and caused people to wonder about the desperately troubled life behind the laughter he gave to millions. With Twitter igniting from record volumes of tributes to the much-loved actor, the death of Robin Williams has caused a public outpouring of grief not seen since the passing of Michael Jackson or Whitney Houston. Emily Herbert’s sensitive and thoughtful biography celebrates his genius, and attempts to understand what could have driven such a warm and gifted man to take his own life.

Emily Herbert is the author of Lady Gaga: Behind the Fame and Michael Jackson: King of Pop.

Book Description John Blake Publishing Ltd, United Kingdom, 2014. Paperback. Condition: New. Language: English. Brand new Book. With his twinkling eyes, boundless energy and unrivalled natural wit, Robin Williams was the comedian who brought laughter to a generation. Through roles in cherished films such as Mrs. Doubtfire, Jumanji, Aladdin and Hook, he became the genial face of family comedy. His child-like enthusiasm was infectious, sweeping viewers away. Allied to his lightning-quick improvisation and ability to riff lewdly off any cue thrown at him, Robin was that rare thing - a true comic genius who appealed to adults and children equally. He could also play it straight, and empathetic depth came to him naturally. A poignant performance in Good Will Hunting won him an Academy Award whilst his masterfully chilling turn in psychological thriller Insomnia shocked audiences and hinted at a darker side. What truly caught the imagination, though, was his good-heartedness. Warmth radiated from him on-screen, but he was legendary for his off-screen acts of selfless generosity. Where most Hollywood A-listers demand outrageous pampering in their contract riders, he always insisted that the production company hire a full quota of homeless people to help make his movies.But behind the laughter lay a deeply troubled man, and tragedy would follow. At midday, on 11 August 2014, Robin Williams was pronounced dead at his California home. The verdict was suicide. He had battled depression and addiction for many years and was allegedly beset by financial difficulties. Emily Herbert's sensitive and thoughtful biography celebrates his genius and warmth, but also attempts to understand what could have driven such a gentle and gifted man to so tragic an end. This is Robin Williams, the life, the laughter, and the deep sorrow of the man who made the world smile. Seller Inventory # AA99781784183004

5. Robin Williams: When the Laughter Stops