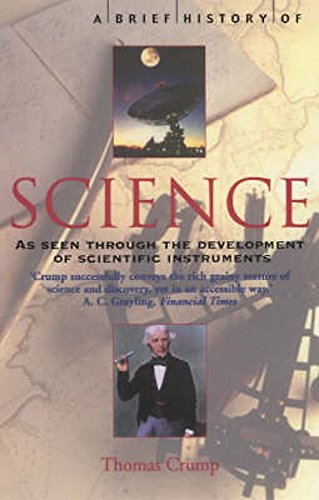 An exploration of scientific advances throughout time. From earliest pre-history, with the dawning understanding of fire and its many uses, up to the astonishing advances of the 21st century, Thomas Crump traces the increasingly sophisticated means employed in our attempts to understand the universe. The result is an account of how our curious nature has continually pushed forward the frontiers of science and, as a consequence, human civilization.

Thomas Crump, successful author of A Brief History of Science, recently underwent a hip operation and brings to this book an understanding of the needs and concerns of the patient. His passionate interest in science and its history has given rise to a number of books, most recently Solar Eclipse and The Anthropology of Numbers. A mathematician and anthropologist, until his retirement in 1994, he taught anthropology at the University of Amsterdam.

otential readers should follow the author's lead and ignore the subtitle of this survey of the history of science in Europe and America, or they may be disappointed. Amsterdam-based writer Crump (Solar Eclipse; The Anthropology of Numbers) does discuss the evolution of scientific equipment, but the book is centered around the scientists, not their instruments. Crump begins with mankind's discovery of how to create fire and ends with SQUIDs, superconducting quantum interference devices. In between, there is chemistry, astronomy and 20th-century physics. The sections on advances in electricity and energy measurement make for particularly fascinating reading. Overall, however, Crump's book would have been more successful if he had followed the lead of his subtitle. He attempts to cover too much, and inevitably there are striking gaps and imbalances that leave the final product feeling scattered. (Only a few paragraphs are devoted to radio and redshift, for instance, while Crump dallies over Wernher von Braun's experiences at the end of World War II.) It might be argued that English scientists receive more attention than those of other countries, although the adept sketch of Dmitri Mendeleyev's career should be required reading for chemistry students. Crump's prose is generally reader-friendly, and mathematical and chemical notation are kept to a minimum. This will make a useful addition to home libraries. 16 pages of photographs and appendixes not seen by PW.

6. A Brief History of Science: through the development of scientific instruments

7. A Brief History of Science

Shipping: US$ 18.12
From United Kingdom to U.S.A.
Destination, rates & speeds