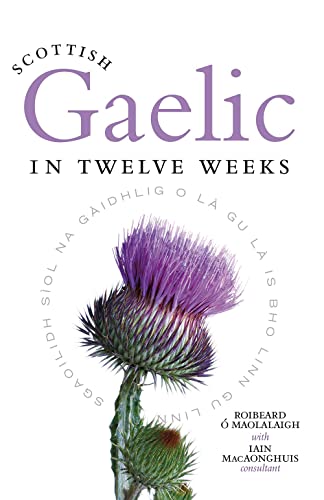 "Scottish Gaelic in Twelve Weeks" has been written both as a self-tuition course for beginners and also for use within the classroom. You may want to learn Gaelic because of a general interest in Celtic or Scottish history and culture, or because it was the everyday language of your ancestors. The cynical observer may wonder if the exercise is worthwhile, when only one and a half per cent of Scotland's population speak the language. However, Gaelic is far from dead; in some parts of the Highlands and Western Isles it is the everyday language, and it represents an important part of the United Kingdom's cultural mix. There are Gaelic-learning classes in almost every area of Scotland. Each lesson in the book contains some essential points of grammar explained and illustrated, exercises, a list of new vocabulary (with a guide to pronunciation, in International Phonetics notation), and an item of conversation.

Roibeard O Maolalaigh organises Beginners' Gaelic Courses at the University of Edinburgh, where he lectures in the Department of Celtic and is Director of the Centre for Irish Studies. His consultant Iain MacAonghuis is a native speaker of Scottish Gaelic who was born and bought up in the Western Isles. He lectured for many years at the School of Scottish Studies, University of Edinburgh (where he is an Honorary Fellow), and has written and broadcast on a range of Gaelic subjects.

'An appealing way to kick-start your Gaelic!' --Scots Magazine