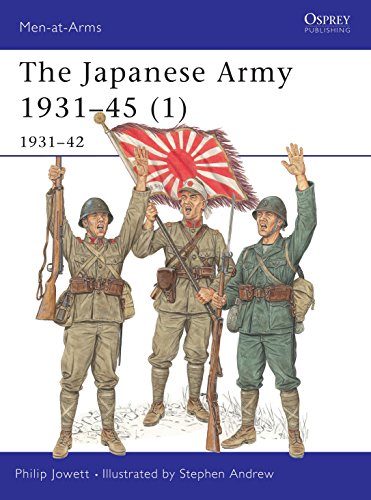 During Japan's devastating Pacific offensive of the 1941-42 period of World War II, the Allies paid a high price for their failure to take seriously an army which had already been fighting in Manchuria and China for ten years. That army was a unique blend of the ancient and the modern and its up-to-date equipment and resourceful tactics served an almost medieval code of unquestioning obedience and ruthless aggression. This first of two titles covers the organisation, equipment, uniforms and character of Japanese ground forces in the Chinese and early Pacific campaigns, illustrated with insignia charts, many rare photographs, and eight meticulous uniform plates.

Philip Jowell was born in Leeds in 1961, and has been interested in military history for as long as he can remember. His first Osprey book was the ground-breaking MAA 306, Chinese Civil War Armies 1911-49; he has since published a three-part sequence on The Italian Army 1940-45 (MAA 340, 349 & 353). A rugby league enthusiast and amateur genealogist, he is married and lives in Leeds.

Book Description Bloomsbury Publishing PLC, United Kingdom, 2002. Paperback. Condition: New. Stephen Andrew (illustrator). Language: English. Brand new Book. From December 1941 the Imperial Japanese Army shocked the world by its lightning victories over the US, British and Dutch forces in the Philippines, Malaya and the East Indies. The Pacific war occupied much of the US war effort, from Pearl Harbor to Okinawa, but although the broad details of these campaigns are common knowledge, few detailed accounts of the Japanese uniforms and equipment are available. This book, researched from new Japanese language sources, describes and illustrates for the first time in the West the uniforms and equipment used in China in the 1930s and their development for the tropical campaigns of 1941/42. Seller Inventory # BTE9781841763538