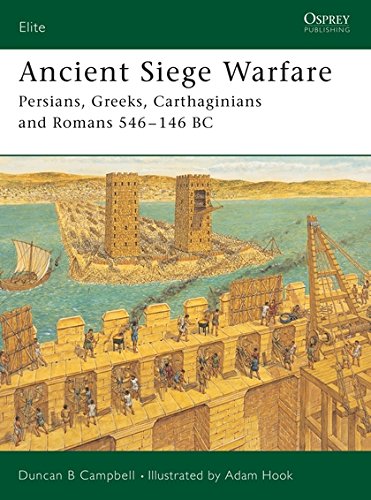 Sieges played a central role in many conflicts of the ancient world and generals, including Darius, Alexander the Great, Hannibal and Scipio Africanus successfully used siegecraft to gain their objectives. As siege tactics became integral to success in war, generals employed the minds of engineers and scientists to develop tactics which ranged from penetrating the defences or blockading the city through to tricks and deception. This fascinating study tracks developments in siege warfare from Ancient Persia in the 6th century BC through to the Roman sieges of the second century BC, describing the range of equipment and techniques which evolved during this period.

An unrivalled illustrated reference source on fighting men and commanders, past and present. Each volume is packed with full colour artwork, making military history uniquely accessible to enthusiasts of all ages.

Dr Duncan B Campbell is a specialist in ancient Greek and Roman warfare. He published his first paper in 1984, as an undergraduate at Glasgow University, and produced a complete re-assessment of Roman siegecraft for his PhD. Over the years, his work has appeared in several international journals. He lives near the Antonine Wall in Scotland with his wife and son.

Book Description Bloomsbury Publishing PLC, United Kingdom, 2005. Paperback. Condition: New. Adam Hook (illustrator). Illustrated. Language: English. Brand new Book. Most generals and leaders, such as Hannibal and Alexander the Great, are renown for their victories in pitched battles, but siege tactics were a necessary and important part of conquering fortified enclaves. Whetehr you chose to break through the defences, go over them, tunnel under them, or trick your way in in Trojan horse-style, the art of laying siege became widely used throughout the ancient world. This well-illustrated study of ancient siege warfare looks at the techniques, tactics and equipment employed, alongside descriptions of actual events. Seller Inventory # BTE9781841767703