Items related to Life Of Pi 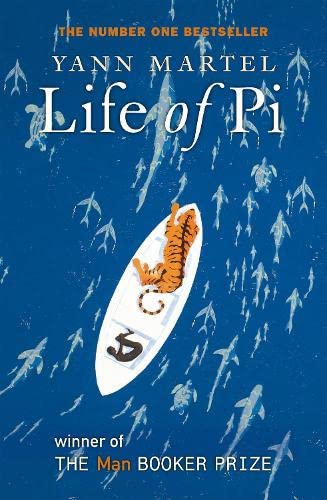 Martel's novel tells the story of Pi—short for Piscine—an unusual boy raised in a zoo in India. Pi's father decides to move the family to live in Canada and sell the animals to the great zoos of America. The ship taking them across the Pacific sinks and Pi finds himself the sole human survivor on a lifeboat with a hyena, an orangutan, a zebra with a broken leg and Bengal tiger called Richard Parker. Life of Pi brings together many themes including religion, zoology, fear, and sheer tenacity. This is a funny, wise, and highly original look at what it means to be human.

Yann Martel's imaginative and unforgettable Life of Pi is a magical reading experience, an endless blue expanse of storytelling about adventure, survival, and ultimately, faith. The precocious son of a zookeeper, 16-year-old Pi Patel is raised in Pondicherry, India, where he tries on various faiths for size, attracting "religions the way a dog attracts fleas." Planning a move to Canada, his father packs up the family and their menagerie and they hitch a ride on an enormous freighter. After a harrowing shipwreck, Pi finds himself adrift in the Pacific Ocean, trapped on a 26-foot lifeboat with a wounded zebra, a spotted hyena, a seasick orangutan, and a 450-pound Bengal tiger named Richard Parker ("His head was the size and color of the lifebuoy, with teeth"). It sounds like a colorful setup, but these wild beasts don't burst into song as if co-starring in an anthropomorphized Disney feature. After much gore and infighting, Pi and Richard Parker remain the boat's sole passengers, drifting for 227 days through shark-infested waters while fighting hunger, the elements, and an overactive imagination. In rich, hallucinatory passages, Pi recounts the harrowing journey as the days blur together, elegantly cataloging the endless passage of time and his struggles to survive: "It is pointless to say that this or that night was the worst of my life. I have so many bad nights to choose from that I've made none the champion." At one point in his journey, Pi recounts, "My greatest wish--other than salvation--was to have a book. A long book with a never-ending story. One that I could read again and again, with new eyes and fresh understanding each time." It's safe to say that the fabulous, fablelike Life of Pi is such a book.

First published in 2002, Martel's breathtaking breakout novel became an international bestseller and went on to win the Man Booker Prize, and was also named Amazon.com's Best Book of 2002. In 2005, after an international competition, Croatian artist Tomislav Torjanac was selected to illustrate a special edition of Life of Pi that features 40 stunning illustrations that present a new perspective on this modern classic. --Brad Thomas Parsons

Amazon.com Exclusive: Outtakes from Tomislav Torjanac's Early Illustrations for Life of Pi From the Back Cover:

NATIONAL BESTSELLER
A NEW YORK TIMES NOTABLE BOOK of 2002
Pi Patel, a God-loving boy and the son of a zookeeper, has a fervent love of stories and practices not only his native Hinduism, but also Christianity and Islam. When Pi is sixteen, his family and their zoo animals emigrate from India to North America aboard a Japanese cargo ship. Alas, the ship sinks -- and Pi finds himself in a lifeboat, his only companions a hyena, an orangutan, a wounded zebra, and a 450-pound Bengal tiger. Soon the tiger has dispatched all but Pi. Can Pi and the tiger find their way to land? Can Pi's fear, knowledge, and cunning keep him alive until they do?
"An impassioned defense of zoos, a death-defying trans-Pacific sea adventure a la Kon-Tiki, and hilarious . . .: This audacious novel manages to be all of these." -- "The New Yorker"
"Life of Pi could renew your faith in the ability of novelists to invest even the most outrageous scenario with plausible life." -- "The New York Times Book Review"
"Life of Pi is a real adventure: brutal, tender, expressive, dramatic, and disarmingly funny. . . . It's difficult to stop reading when the pages run out." -- "San Francisco Chronicle"
Yann Martel was born in Spain in 1963 of Canadian parents. He grew up in Costa Rica, France, Mexico and Canada, and has traveled extensively on his own. After studying philosophy at university, he worked variously as a dishwasher, tree planter and security guard. Then he began to write. When he's not living somewhere else, he lives in Montreal.