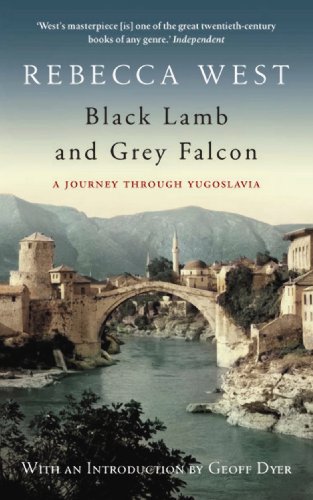 First published in 1942, Rebecca West's epic masterpiece is widely regarded as the most illuminating book to have been written on the former state of Yugoslavia. It is a work of enduring value that remains essential for anyone attempting to understand the enigmatic history of the Balkan states, and the continuing friction in this fractured area of Europe.

Review:
Part travelogue, part history, part love letter on a thousand-page scale, Rebecca West's Black Lamb and Grey Falcon is a genre-bending masterwork written in elegant prose. But what makes it so unlikely to be confused with any other book of history, politics, or culture--with, in fact, any other book--is its unashamed depth of feeling: think The Decline and Fall of the Roman Empire crossed with Let Us Now Praise Famous Men. West visited Yugoslavia for the first time in 1936. What she saw there affected her so much that she had to return--partly, she writes, because it most resembled "the country I have always seen between sleeping and waking," and partly because "it was like picking up a strand of wool that would lead me out of a labyrinth in which, to my surprise, I had found myself immured." Black Lamb is the chronicle of her travels, but above all it is West following that strand of wool: through countless historical digressions; through winding narratives of battles, slavery, and assassinations; through Shakespeare and Augustine and into the very heart of human frailty.

West wrote on the brink of World War II, when she was "already convinced of the inevitability of the second Anglo-German war." The resulting book is colored by that impending conflict, and by West's search for universals amid the complex particulars of Balkan history. In the end, she saw the region's doom--and our own--in a double infatuation with sacrifice, the "black lamb and grey falcon" of her title. It's the story of Abraham and Isaac without the last-minute reprieve: those who hate are all too ready to martyr the innocent in order to procure their own advantage, and the innocent themselves are all too eager to be martyred. To West, in 1941, "the whole world is a vast Kossovo, an abominable blood-logged plain." Unfortunately, little has happened since then to prove her wrong. --Mary Park

'Impossible to put down, both timeless and of its time - a travel book and epic narrative history brimming with passion, anger, scholarship and intuition, hatred and love.' Observer

First published in 1942, Rebecca West's epic masterpiece is widely regarded as the most illuminating book to have been written on what was once Yugoslavia, essential for anyone attempting to understand the enigmatic history of the Balkan states.

'Such incandescent writing - you find yourself wanting to mark every sentence in order to go back and relish it again.' Brian Eno

'One of the supreme masterpieces of the twentieth century . . . As a book about Yugoslavia it's a kind of metaphysical Lonely Planet that never requires updating . . . this is history as it might have been written by Ryszard Kapuscinski or Gabriel García Márquez'. Geoff Dyer, from his introduction

'It is hard to convey the flavour of a book so rich in observation, history, philosophy, political ideas and ironic humour. West is full of digressions which are extraordinary, but never boring.' The Times

'The sheer quality and depth of the writing make it one of the great books of the century.' Times Literary Supplement

Book Description Paperback. Condition: Fair. A readable copy of the book which may include some defects such as highlighting and notes. Cover and pages may be creased and show discolouration. Seller Inventory # GOR004785836

Book Description Paperback. Condition: Good. The book has been read but remains in clean condition. All pages are intact and the cover is intact. Some minor wear to the spine. Seller Inventory # GOR002061295

Book Description Condition: Good. Good condition. All used from op-shops and charities. It's sent as a regular letter with a tracking sticker which sometimes dosent get scanned. Seller Inventory # PHD 5578 9781841957876

Book Description Condition: Good. This is an ex-library book and may have the usual library/used-book markings inside.This book has soft covers. In good all round condition. Please note the Image in this listing is a stock photo and may not match the covers of the actual item,1150grams, ISBN:9781841957876. Seller Inventory # 9414498

Shipping: US$ 14.47
From United Kingdom to U.S.A.
Destination, rates & speeds

Book Description Soft cover. Condition: Good. Has some light general reading/shelfwear, with a small amount of highlighting in luminous pen - otherwise this is a clean, tight copy. Quick dispatch from the UK. Seller Inventory # 078221

Book Description Paperback. Condition: Very Good. ALL ITEMS ARE DISPATCHED FROM THE UK WITHIN 24 HOURS ( BOOKS ORDERED OVER THE WEEKEND DISPATCHED ON MONDAY) ALL OVERSEAS ORDERS SENT BY AIR MAIL. WE ALSO ACCEPT PAYMENT IN US DOLLARS OR EURO BY BANK TRANSFER. IF YOU ARE LOCATED OUTSIDE THE UK PLEASE ASK US FOR A POSTAGE QUOTE FOR MULTI VOLUME SETS BEFORE ORDERING. Seller Inventory # mon0000866840

Book Description Paperback. Condition: Very Good. Item is in very good condition. If supplemental codes/CDs for textbooks are required please contact us prior to purchasing as they may be missing. Photos are stock pictures and not of the actual item. Seller Inventory # DS-1841957879-2

Book Description Condition: Good. A+ Customer service! Satisfaction Guaranteed! Book is in Used-Good condition. Pages and cover are clean and intact. Used items may not include supplementary materials such as CDs or access codes. May show signs of minor shelf wear and contain limited notes and highlighting. Seller Inventory # 1841957879-2-4