Items related to The Masters (Strangers and Brothers)

The Masters (Strangers and Brothers) 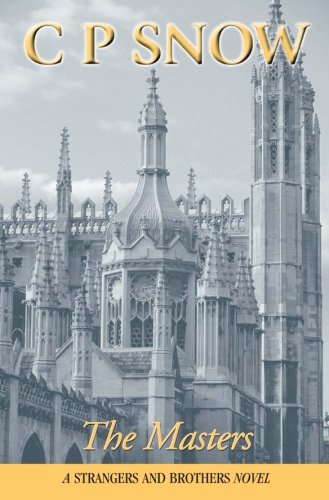 The fourth in the Strangers and Brothers series begins with the dying Master of a Cambridge college. His imminent demise causes intense rivalry and jealousy amongst the other fellows. Former friends become enemies as the election looms.

C.P. Snow was born in Leicester, on 15 October 1905. He was educated from age 11 at Alderman Newton's School for boys where he excelled in most subjects, enjoying a reputation for an astounding memory. In 1923, he gained an external scholarship in science at London University, whilst working as a laboratory assistant at Newton's to gain the necessary practical experience, because Leicester University, as it was to become, had no chemistry or physics departments at that time.

Having achieved a first class degree, followed by a Master of Science he won a studentship in 1928 which he used to research at the famous Cavendish Laboratory in Cambridge. Snow went on to become a Fellow of Christ's College, Cambridge, in 1930 where he also served as a tutor, but his position became increasingly titular as he branched into other areas of activity.  In 1934, he began to publish scientific articles in 'Nature', and then 'The Spectator' before becoming editor of the journal 'Discovery' in 1937.

He was also writing fiction during this period and in 1940 'Strangers and Brothers' was published. This was the first of eleven novels in the series and was later renamed 'George Passant' when 'Strangers and Brothers' was used to denote the series itself. 'Discovery' became a casualty of the war, closing in 1940. However, by this time Snow was already involved with the Royal Society, who had organised a group to specifically use British scientific talent operating under the auspices of the Ministry of Labour. He served as the Ministry's technical director from 1940 to 1944.

After the war, he became a civil service commissioner responsible for recruiting scientists to work for the government and also returned to writing, continuing the 'Strangers and Brothers' novels.  'The Light and the Dark' was published in 1947, followed by 'Time of Hope' in 1949, and perhaps the most famous and popular of them all, 'The Masters', in 1951. He planned to finish the cycle within five years, but the final novel 'Last Things' wasn't published until 1970.

C.P. Snow married the novelist Pamela Hansford Johnson in 1950 and they had one son, Philip, in 1952.  He was knighted in 1957 and became a life peer in 1964, taking the title Baron Snow of the City Leicester.  He also joined Harold Wilson's first government as Parliamentary Secretary to the new Minister of Technology. When the department ceased to exist in 1966 he became a vociferous back-bencher in the House of Lords.

After finishing the 'Strangers and Brothers' series, Snow continued writing both fiction and non-fiction. His last work of fiction was 'A Coat of Vanish', published in 1978. His non-fiction included a short life of Trollope published in 1974 and another, published posthumously in 1981, 'The Physicists: a Generation that Changed the World'. He was also inundated with lecturing requests and offers of honorary doctorates. In 1961, he became Rector of St. Andrews University and for ten years also wrote influential weekly reviews for the 'Financial Times'.

1. The Masters (Strangers and Brothers)

2. The Masters (Strangers and Brothers)

3. THE MASTERS (STRANGERS AND BROTH

4. The Masters (Strangers and Brothers)

5. The Masters (Strangers and Brothers)