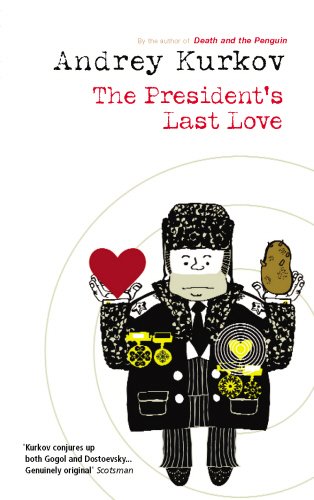 ANDREY KURKOV, born in St Petersburg in 1961, now lives in Kiev. Having graduated from the Kiev Foreign Languages Institute, he worked for some time as a journalist, did his military service as a prison warder at Odessa, then became a film cameraman, writer of screenplays and author of critically acclaimed and popular novels including Death and the Penguin.

“Kurkov’s eye for the absurdities of Ukrainian life is as sharp as ever.” – Sunday Telegraph

“Kurkov is a fine satirist and a real, blackly comic find.” – Observer

Book Description Harvill Secker, 2007. Paperback. Condition: Good. The book has been read but remains in clean condition. All pages are intact and the cover is intact. Some minor wear to the spine. Seller Inventory # GOR001936278

Shipping: US$ 11.14
From United Kingdom to U.S.A.
Destination, rates & speeds

Book Description Harvill Secker, 2007. Paperback. Condition: Used; Good. Ex Library Copy. . stain on side **SHIPPED FROM UK** We believe you will be completely satisfied with our quick and reliable service. All orders are dispatched as swiftly as possible! Buy with confidence!. Seller Inventory # 3735828

Shipping: US$ 9.47
From United Kingdom to U.S.A.
Destination, rates & speeds

Book Description Vintage Publishing, United Kingdom, London, 2007. Paperback. Condition: Very Good. Moscow, January 2013. Bunin, the Ukrainian President, has joined other heads of state in an open air swimming pool, to celebrate the Fourth Centenary of the Romanov Dynasty. Treading water, and drinking vodka with Putin, he's on top of his game and in fine health. Yet two years later Bunin undergoes a heart transplant, with very serious repercussions.Rewind to the early '90s; the Soviet Union has crumbled and in the midst of a new independent Ukraine struggling to find its feet, a young Sergey Pavlovich Bunin is on the make. Casting aside a career as a catering manager he enters the political fray and begins the long and precarious journey to the top, at the same time looking after his impoverished mother and enfeebled brother. Spanning forty years, "The President's Last Love" is Kurkov's most ambitious work to date, and delivers an intricately woven and often hilarious political satire on life before and after the Iron Curtain. A colossus of a novel concerning love, power, corruption, lies and potatoes. The book has been read, but is in excellent condition. Pages are intact and not marred by notes or highlighting. The spine remains undamaged. Seller Inventory # GOR001664874

Shipping: US$ 11.14
From United Kingdom to U.S.A.
Destination, rates & speeds