Items related to City of Quartz: Excavating the Future in Los Angeles

City of Quartz: Excavating the Future in Los Angeles 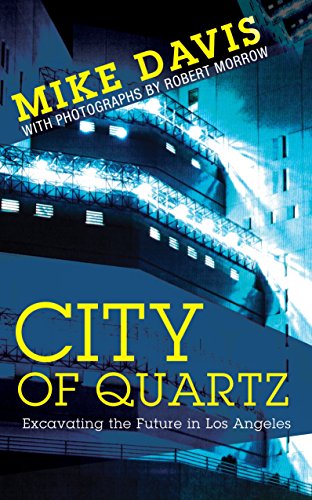 No metropolis has been more loved or more hated. To its official boosters, “Los Angeles brings it all together.” To detractors, LA is a sunlit mortuary where “you can rot without feeling it.” To Mike Davis, the author of this fiercely elegant and wide- ranging work of social history, Los Angeles is both utopia and dystopia, a place where the last Joshua trees are being plowed under to make room for model communities in the desert, where the rich have hired their own police to fend off street gangs, as well as armed Beirut militias.

In City of Quartz, Davis reconstructs LA’s shadow history and dissects its ethereal economy. He tells us who has the power and how they hold on to it. He gives us a city of Dickensian extremes, Pynchonesque conspiracies, and a desperation straight out of Nathaniel Westa city in which we may glimpse our own future mirrored with terrifying clarity.

In this new edition, Davis provides a dazzling update on the city’s current status.

Mike Davis peers into a looking glass to divine the future of Los Angeles, and what he sees is not encouraging: a city--or better, a concatenation of competing city states--torn by racial enmity, economic disparity, and social anomie. Looking backward, Davis suggests that Los Angeles has always been contested ground. In the 1840s, he writes, a combination of drought and industrial stock raising led to the destruction of small-scale Spanish farming in the region. In the 1910s, Los Angeles was the scene of a bitter conflict between management and industrial workers, so bitter that the publisher of the Los Angeles Times retreated to a heavily fortified home he called "The Bivouac." And in 1992, much of the city fell before flames and riot in a scenario Davis describes as thus: "Gangs are multiplying at a terrifying rate, cops are becoming more arrogant and trigger-happy, and a whole generation is being shunted toward some impossible Armageddon." Davis's voice-in-a-whirlwind approach to the past, present, and future of Los Angeles is alarming and arresting, and his book is essential reading for anyone interested in contemporary affairs. --Gregory MacNamee

"An eye-opening account of the economic, political, intellectual and architectural development of 20th-century Los Angeles, City of Quartz is a deeply troubling look at a city beset by environmental time bombs, vast inequities of wealth and chronic, increasingly brutal racial violence...The city that takes shape in this elegantly argued book seems to be swiftly heading toward some Armageddon...Few books shed as much light on their subjects as this opionated and original excavation of Los Angeles from the mythical debris of its past and future."--Sara Frankel, The San Francisco Examiner

1. City of Quartz: Excavating the Future in Los Angeles

2. City of Quartz: Excavating the Future in Los Angeles

5. City of Quartz: Excavating the Future in Los Angeles