Items related to England's Lost Houses: From the Archives of Country...

England's Lost Houses: From the Archives of Country Life 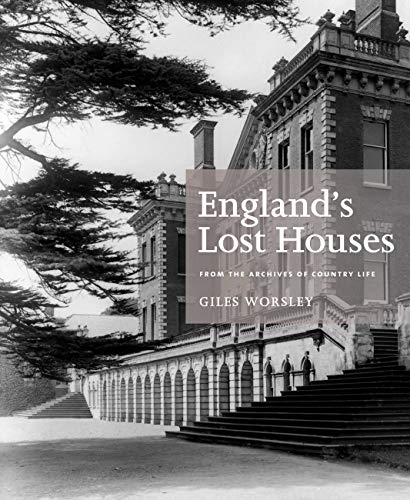 Of all the photographs in the Country Life archive, none are more poignant than the images of houses that have been lost through demolition or fire. In a great number of cases, the photographs taken by the magazine for their weekly feature on country houses are the only record of many of the most important houses and interiors that were destroyed.

From Uffington House, Lincolnshire, a fine Restoration house burnt in 1904, to the Rococo magnificence of Nuthall temple, Nottinghamshire, its site now buried under the M1 motorway, this book provides a moving testimony to one of the saddest chapters in English 20th century history.

Giles Worsley's incisive text makes this more than just an elegy for lost glories. By studying the circumstances behind one hundred houses that have gone, he is able to explain why such a large number were destroyed in the last century. He explains how many houses were lost as great landowners, responding to economic and political changes, sold off secondary estates and demolished palatial houses of the nineteenth century. He also examines how chance played its part, with fire emerging as one of the chief causes of destruction.

As the twentieth century recedes into history the story of the country house over the past hundred years becomes increasingly fascinating. England's Lost Houses is essential reading for all those seeking to understand what really happened.

Of all the photographs in COUNTRY LIFE magazine’s extensive archive, none are more poignant or intriguing than the images of houses that have been lost. In many cases, these pictures are also the only surviving records of important houses and interiors that were destroyed. For the first time, these images have been collected in one volume, providing a powerful impression of the richness and variety of the English country house and of the treasures that were lost through demolition or fire during the 20th century. The range of buildings is surprisingly wide—from the Rococo Nuthall Temple, Nottinghamshire and the Classical serenity of Stoke Edith, Herefordshire to the richly furnished interiors of Highcliffe Castle, Hampshire and one of the great masterpieces of 17th–century architecture: Coleshill, Berkshire. Giles Worsley’s illuminating text places the demolition of country houses in its historical context, revealing why so many were destroyed in the last century.

Giles Worsley was educated at Eton College, studied Modern History at New College University of Oxford (MA) including architectural history from Howard Colvin, and then in 1983 studied at the Courtauld Institute of Art (PhD, 1989) with his thesis on The Design and Development of the Stable and Riding House in Great Britain from the Thirteenth Century to 1914, which was later reworked into his 2004 book The British Stable.

1. England's Lost Houses: From the Archives of Country Life