Items related to Fortress Israel: The Inside Story of the Military Elite...

Patrick Tyler,Patrick Tyler Fortress Israel: The Inside Story of the Military Elite Who Run the Country - and Why They Can't Make Peace

Fortress Israel: The Inside Story of the Military Elite Who Run the Country - and Why They Can't Make Peace 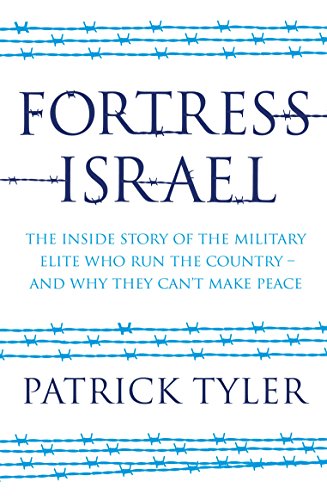 “Once in the military system, Israelis never fully exit,” writes the prizewinning journalist Patrick Tyler in the prologue to Fortress Israel. “They carry the military identity for life, not just through service in the reserves until age forty-nine . . . but through lifelong expectations of loyalty and secrecy.” The military is the country to a great extent, and peace will only come, Tyler argues, when Israel’s military elite adopt it as the national strategy.

Fortress Israel is an epic portrayal of Israel’s martial culture—of Sparta presenting itself as Athens. From Israel’s founding in 1948, we see a leadership class engaged in an intense ideological struggle over whether to become the “light unto nations,” as envisioned by the early Zionists, or to embrace an ideology of state militarism with the objective of expanding borders and exploiting the weaknesses of the Arabs. In his first decade as prime minister, David Ben-Gurion conceived of a militarized society, dominated by a powerful defense establishment and capable of defeating the Arabs in serial warfare over many decades. Bound by self-reliance and a stern resolve never to forget the Holocaust, Israel’s military elite has prevailed in war but has also at times overpowered Israel’s democracy. Tyler takes us inside the military culture of Moshe Dayan, Yitzhak Rabin, Ariel Sharon, and Benjamin Netanyahu, introducing us to generals who make decisions that trump those of elected leaders and who disdain diplomacy as appeasement or surrender.

Fortress Israel shows us how this martial culture envelops every family. Israeli youth go through three years of compulsory military service after high school, and acceptance into elite commando units or air force squadrons brings lasting prestige and a network for life. So ingrained is the martial outlook and identity, Tyler argues, that Israelis are missing opportunities to make peace even when it is possible to do so. “The Zionist movement had survived the onslaught of world wars, the Holocaust, and clashes of ideology,” writes Tyler, “but in the modern era of statehood, Israel seemed incapable of fielding a generation of leaders who could adapt to the times, who were dedicated to ending . . . [Israel’s] isolation, or to changing the paradigm of military preeminence.”

Based on a vast array of sources, declassified documents, personal archives, and interviews across the spectrum of Israel’s ruling class, Fortress Israel is a remarkable story of character, rivalry, conflict, and the competing impulses for war and for peace in the Middle East.

Patrick Tyler worked for twelve years at The Washington Post before joining The New York Times in 1990, where he served as chief correspondent. His books include Running Critical, A Great Wall (which won the 2000 Lionel Gelber Prize), and A World of Trouble. He lives in Washington, D.C.

ONE
Ben-Gurion: The Origins of Militarism

1. Fortress Israel: The Inside Story of the Military Elite Who Run the Country - and Why They Can't Make Peace

Shipping: US$ 15.97
From United Kingdom to U.S.A.
Destination, rates & speeds