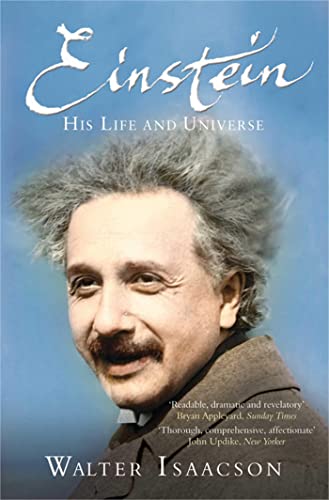 Einstein was a rebel and nonconformist from boyhood days, and these character traits drove both his life and his science. In this narrative, Walter Isaacson explains how his mind worked and the mysteries of the universe that he discovered.

As a scientist, Albert Einstein is undoubtedly the most epic among 20th-century thinkers. Albert Einstein as a man, however, has been a much harder portrait to paint, and what we know of him as a husband, father, and friend is fragmentary at best. With Einstein: His Life and Universe, Walter Isaacson (author of the bestselling biographies Benjamin Franklin and Kissinger) brings Einstein's experience of life, love, and intellectual discovery into brilliant focus. The book is the first biography to tackle Einstein's enormous volume of personal correspondence that heretofore had been sealed from the public, and it's hard to imagine another book that could do such a richly textured and complicated life as Einstein's the same thoughtful justice. Isaacson is a master of the form and this latest opus is at once arresting and wonderfully revelatory. --Anne Bartholomew

Amazon.com: What kind of scientific education did you have to give yourself to be able to understand and explain Einstein's ideas?

Isaacson: I've always loved science, and I had a group of great physicists--such as Brian Greene, Lawrence Krauss, and Murray Gell-Mann--who tutored me, helped me learn the physics, and checked various versions of my book. I also learned the tensor calculus underlying general relativity, but tried to avoid spending too much time on it in the book. I wanted to capture the imaginative beauty of Einstein's scientific leaps, but I hope folks who want to delve more deeply into the science will read Einstein books by such scientists as Abraham Pais, Jeremy Bernstein, Brian Greene, and others.

Amazon.com: That Einstein was a clerk in the Swiss Patent Office when he revolutionized our understanding of the physical world has often been treated as ironic or even absurd. But you argue that in many ways his time there fostered his discoveries. Could you explain?

Isaacson: I think he was lucky to be at the patent office rather than serving as an acolyte in the academy trying to please senior professors and teach the conventional wisdom. As a patent examiner, he got to visualize the physical realities underlying scientific concepts. He had a boss who told him to question every premise and assumption. And as Peter Galison shows in Einstein's Clocks, Poincare's Maps, many of the patent applications involved synchronizing clocks using signals that traveled at the speed of light. So with his office-mate Michele Besso as a sounding board, he was primed to make the leap to special relativity.

Amazon.com: That time in the patent office makes him sound far more like a practical scientist and tinkerer than the usual image of the wild-haired professor, and more like your previous biographical subject, the multitalented but eminently earthly Benjamin Franklin. Did you see connections between them?

Isaacson: I like writing about creativity, and that's what Franklin and Einstein shared. They also had great curiosity and imagination. But Franklin was a more practical man who was not very theoretical, and Einstein was the opposite in that regard.

Amazon.com: Of the many legends that have accumulated around Einstein, what did you find to be least true? Most true?

Isaacson: The least true legend is that he failed math as a schoolboy. He was actually great in math, because he could visualize equations. He knew they were nature's brushstrokes for painting her wonders. For example, he could look at Maxwell's equations and marvel at what it would be like to ride alongside a light wave, and he could look at Max Planck's equations about radiation and realize that Planck's constant meant that light was a particle as well as a wave. The most true legend is how rebellious and defiant of authority he was. You see it in his politics, his personal life, and his science.

Amazon.com: At Time and CNN and the Aspen Institute, you've worked with many of the leading thinkers and leaders of the day. Now that you've had the chance to get to know Einstein so well, did he remind you of anyone from our day who shares at least some of his remarkable qualities?

Isaacson: There are many creative scientists, most notably Stephen Hawking, who wrote the essay on Einstein as "Person of the Century" when I was editor of Time. In the world of technology, Steve Jobs has the same creative imagination and ability to think differently that distinguished Einstein, and Bill Gates has the same intellectual intensity. I wish I knew politicians who had the creativity and human instincts of Einstein, or for that matter the wise feel for our common values of Benjamin Franklin.

Walter Isaacson, University Professor of History at Tulane, has been CEO of the Aspen Institute, chairman of CNN, and editor of Time magazine. He is the author of Leonardo da Vinci; The Innovators; Steve Jobs; Einstein: His Life and Universe; Benjamin Franklin: An American Life; and Kissinger: A Biography, and the co-author of The Wise Men: Six Friends and the World They Made. He and his wife live in New Orleans. Facebook: Walter Isaacson, Twitter: @WalterIsaacson

1. Einstein: His Life and Universe (Paperback)

Book Description Simon & Schuster Ltd, United Kingdom, 2008. Paperback. Condition: New. ed. Language: English. Brand new Book. NOW A MAJOR SERIES 'GENIUS' ON NATIONAL GEOGRAPHIC, PRODUCED BY RON HOWARD AND STARRING GEOFFREY RUSHEinstein is the great icon of our age: the kindly refugee from oppression whose wild halo of hair, twinkling eyes, engaging humanity and extraordinary brilliance made his face a symbol and his name a synonym for genius. He was a rebel and nonconformist from boyhood days. His character, creativity and imagination were related, and they drove both his life and his science. In this marvellously clear and accessible narrative, Walter Isaacson explains how his mind worked and the mysteries of the universe that he discovered. Einstein's success came from questioning conventional wisdom and marvelling at mysteries that struck others as mundane. This led him to embrace a worldview based on respect for free spirits and free individuals. All of which helped make Einstein into a rebel but with a reverence for the harmony of nature, one with just the right blend of imagination and wisdom to transform our understanding of the universe. This new biography, the first since all of Einstein's papers have become available, is the fullest picture yet of one of the key figures of the twentieth century. This is the first full biography of Albert Einstein since all of his papers have become available -- a fully realised portrait of this extraordinary human being, and great genius.Praise for EINSTEIN by Walter Isaacson:- 'YOU REALLY MUST READ THIS.' Sunday Times 'As pithy as Einstein himself.' New Scientist '[A] brilliant biography, rich with newly available archival material.' Literary Review 'Beautifully written, it renders the physics understandable.' Sunday Telegraph 'Isaacson is excellent at explaining the science. ' Daily Express. Seller Inventory # AA89781847390547

6. Einstein: His Life And Universe

7. Einstein: His Life and Universe

9. Einstein: His Life and Universe

10. Einstein: His Life and Universe