Items related to In a Strange Room

Galgut, Damon In a Strange Room

In a Strange Room 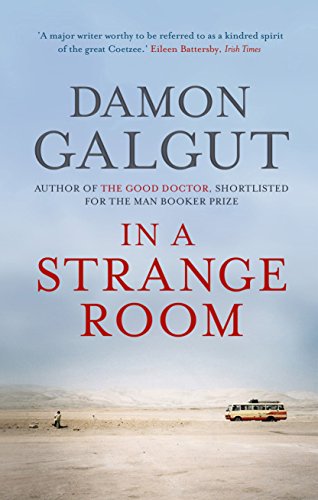 A young man takes three journeys, through Greece, India and Africa. He travels lightly, simply. To those who travel with him and those whom he meets on the way - including a handsome, enigmatic stranger, a group of careless backpackers and a woman on the edge - he is the Follower, the Lover and the Guardian. Yet, despite the man's best intentions, each journey ends in disaster. Together, these three journeys will change his whole life. A novel of longing and thwarted desire, rage and compassion, "In a Strange Room" is the hauntingly beautiful evocation of one man's search for love, and a place to call home.

Damon Galgut was born in Pretoria in 1963. He wrote his first novel, A Sinless Season, when he was seventeen. His other books include Small Circle of Beings, The Beautiful Screaming of Pigs, The Quarry, The Good Doctor and The Impostor. The Good Doctor was shortlisted for the Man Booker Prize, the Commonwealth Writers' Prize and the Dublin/IMPAC Award. The Impostor was also shortlisted for the Commonwealth Writers' Prize. He lives in Cape Town.

Starred Review. There's a lot of travel in Booker Prize finalist Galgut's (The Good Doctor) new novel, but he's more interested in depicting the randomness, heightened sensitivity, dread, and possibility that come from unfamiliar places than in seeing the sights. A South African man travels in Greece, Lesotho, Zimbabwe, Malawi, Tanzania, and India, forming the complicated, tenuous relationships that provide the book's three sections titles (Follower; Lover; Guardian). This character, who bears the author's name and seems to share his history, is both "he" and "I." Though these shifts can occur in the space of a sentence, they're surprisingly easy to accept, and attentive readers will get a subtle, frank depiction of some of the problems of writing; "he" seems to be Galgut, but often experiences himself as divided, uncertain, and blurry as a fictional character evading his creator, "I" often steps in to remind us of the limits of memory and the artificiality of genre distinctions. At its best Galgut's tale has the feel of arriving in a destination you'd never planned to go. It's not always pleasant, but it's strangely fascinating.

1. In A Strange Room

2. In a Strange Room: SHORTLISTED FOR THE MAN BOOKER PRIZE 2010 [Hardcover] Galgut, Damon

3. In a Strange Room