Items related to Echoes from the Dead Zone: Across the Cyprus Divide

Papadakis, Yiannis Echoes from the Dead Zone: Across the Cyprus Divide

Echoes from the Dead Zone: Across the Cyprus Divide 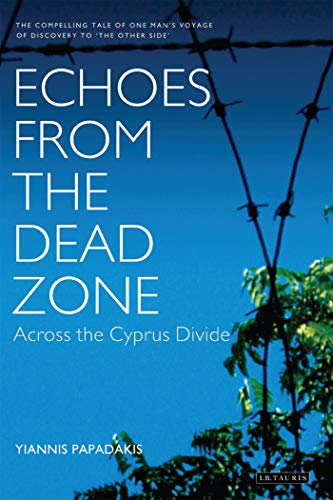 The narrative of Cyprus' recent history has created numerous attitudes and prejudices which run deep but which have never before been explored on a human level. Now for the first time Yiannis Papadakis, firmly planted in the Greek Cypriot world, sets out to discover ""The Other""-- the much maligned Turks. Papadakis delves into the two communities, locked in their mutually contemptuous embrace, to explore their common humanity and to understand what has divided them.

Yiannis Papadakis is Assistant Professor of Anthropology at the University of Cyprus.

'Packed with historical information. It also contains moving personal testimonies from the kind of ordinary people whose voices are not usually heard above the drum beating din of history. What makes it really memorable though, is its wry humour.' - Irish Times 'He [Papadakis] can also be seen as shedding new light on old wounds - and doing his compatriots an enormous (an enormously healing) favour in the process.' - Irish Times 'Papadakis combines his excellent scholarly skills and personal background to explore the issues of identity, perceptions and narratives in Cyprus... The book is virtually free of academic terminology; stylistically, it is more like a travel book. It is humorous, moving and disturbing.' - Journal of Peace Research 'This bold book could be a cornerstone not simply in the literature, but in the resolution of the Cyprus conflict.' - Global Dialogue 'A poignant account of the ways in which collective identities surface in official and unofficial historical registers... a brave attempt to reappraise the past looking for disciples in anthropology and beyond.' - Rodanthi Tzanelli, Ethnic and Racial Studies 'Papadakis' text stands out as providing a much-needed anthropological and humanist insight into a conflict on which so much has been repeatedly and derivatively published over the years.'- Cyprus Review 'If we do not develop new ways of understanding such conflict, they may well endlessly replicate themselves. Papadakis' superb study makes this point all too clear.' - Cyprus Review Canadian Journal of Sociology Online July- August 2006 'Papadakis, has written a unique book that is a pleasure to read. It should be on the bookshelf of anyone interested in understanding the people of Cyprus and their recent unhappy history.' - Tozun Bahcheli. Postcolonial Studies, Vol. 9, No 3. 2006 'Remarkable'. -Christopher Connery and Vanita Seth. Ethnic and racial studies vol.29 No. 3 May 2006 Book Reviews 'The book is a poignant account of the ways in which collective identities surface in official and unofficial historical registers.' - Rodanthi Tzanelli. Journal of Peace Research Vol 42. 2005. 'A captivating book'. - Malte Pehl. Global Dialogue: Vol 7. 2005. ' The compelling tale of one man's voyage of discovery to 'the other side' is the superscript on the cover of this book, announcing at once its ambivalent location in the genres of both novel-writing and academic monograph, its highly reflexive approach, and its author's charming self-mocking humour.' -Olga Demetriou.

1. Echoes from the Dead Zone: Across the Cyprus Divide

2. ECHOES FROM THE DEAD ZONE: ACROS

3. Echoes from the Dead Zone: Across the Cyprus Divide

4. Echoes From The Dead Zone: Across The Cyprus Divide