Items related to Losing My Virginity: the Autobiography 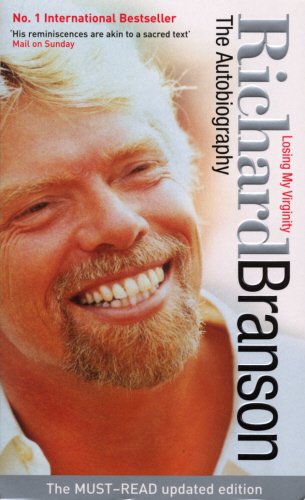 The autobiography of the Virgin tycoon. "Having come close to dying over the Atlas Mountains, I thought that I should write this book now, in case my guardian angel ever deserts me. I also realised that my children, Holly and Sam, who are still young, would not really know what I had done and why I had done it. So this autobiography is for Holly and Sam, the best thing I've created in the last eighteen years (though I can't take all the credit). But most especially for their mother, my wife Joan, who's seen me through most of the highs and lows. I have also written this book to show how we made Virgin what it is today. Rather like our balloon flights, these years have been all about survival. If you read carefully between the lines you will, I hope, understand our vision and where we are going. Some people say that this vision breaks all the rules and is wildly kaleidoscopic; others say that Virgin is set to become one of the leading brand names of the next century; others analyse it down to the last degree and write academic papers on it. As for me and the wonderful team around me, we just pick up the phone and get on with it -- and have one hell of an adventure in the process."

In this autobiography, Virgin Group founder Richard Branson says one of his prime business criteria is "fun." Fun made Branson a billionaire, and few business memoirs are one-billionth as fun as Branson's, nor as niftily written. Not only does it relate his side of near-death corporate experiences, it tells how the chairman literally cheated death by gun, shipwreck, and balloon crash.

Branson's empire--now encompassing interests in an airline, pop music, soda pop, e-commerce, and financial services--began when the dyslexic 16-year-old dropped out of school in 1968 to found the British magazine Student. His headmaster said, "I predict that you will either go to prison or become a millionaire." Briefly imprisoned for dodging customs selling records, Branson got his first million by releasing Tubular Bells, a maverick recording all the stuffy executives rejected. (1998's Tubular Bells III puts the series' sales over 20 million.)

Despite wild tales of Branson's wife-swapping and Keith Richards fleeing naked from Branson's studio at gunpoint with another man's woman, the most shocking parts of the memoir concern British Airways' James Bond-like "dirty tricks" campaign against Virgin Atlantic, resulting in the biggest award for damages in English history.

Though it's filled with famous names, witty quotes, and pulse-pounding accounts of lunatic balloon adventures, it is as a business thriller that the book really scores. His instinctive bet-the-ranch tactics could cost him all, or earn another billion. Either way, Branson will likely remain the most entertaining entrepreneur in Europe. --Tim Appelo

That's the philosophy that has allowed Richard Branson, in slightly more than twenty-five years, to spawn so many successful ventures. From the airline business (Virgin Atlantic Airways), to music (Virgin Records and V2), to cola (Virgin Cola), to retail (Virgin Megastores), and nearly a hundred others, ranging from financial services to bridal wear, Branson has a track record second to none.

Losing My Virginity is the unusual, frequently outrageous autobiography of one of the great business geniuses of our time. When Richard Branson started his first business, he and his friends decided that "since we're complete virgins at business, let's call it just that: Virgin." Since then, Branson has written his own "rules" for success, creating a group of companies with a global presence, but no central headquarters, no management hierarchy, and minimal bureaucracy.

Many of Richard Branson's companies--airlines, retailing, and cola are good examples--were started in the face of entrenched competition. The experts said, "Don't do it." But Branson found golden opportunities in markets in which customers have been ripped off or underserved, where confusion reigns, and the competition is complacent.
And in this stressed-out, overworked age, Richard Branson gives us a new model: a dynamic, hardworking, successful entrepreneur who lives life to the fullest. Family, friends, fun, and adventure are equally important as business in Branson's life. Losing My Virginity is a portrait of a productive, sane, balanced life, filled with rich and colorful stories:

Crash-landing his hot-air balloon in the Algerian desert, yet remaining determined to have another go at being the first to circle the globe

Staging a rescue flight into Baghdad before the start of the Gulf War . . .

And much more. Losing My Virginity is the ultimate tale of personal and business survival from a man who combines the business prowess of Bill Gates and the promotional instincts of P. T. Barnum.

Also available in the UK from Virgin Publishing, and in Canada from General Publishing,
From the Hardcover edition.

Losing My Virginity: The Autobiography

LOSING MY VIRGINITY: THE AUTOBIO

Shipping: US$ 33.09
From United Kingdom to U.S.A.
Destination, rates & speeds