Items related to The Vital Guide to Fighting Aircraft in World War II... 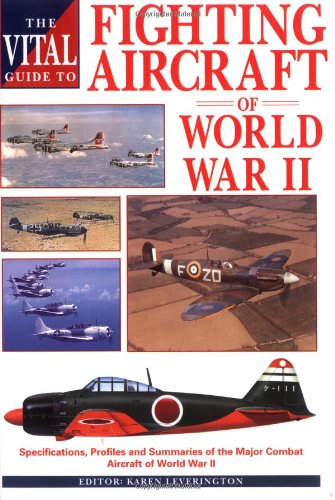 This superbly produced pocket-sized reference is filled with 12 of the most important combat aircraft of WWII. Each page is devoted to a single type and displays a detailed color technical drawing, a 3-view drawing, an action photograph, and descriptive text. Every nation is represented.

Compiled by a British publisher and edited by a staffer of World Air Power Journal, this a collection of data regarding 116 combat aircraft used in World War II by the major participants?Britain, the United States, France, Germany, Italy, Japan, and the Soviet Union. The one page devoted to each aircraft includes a photo, line drawings, color art, and a capsule history with its vital specifications. The photos and color art are spectacular, but, with few exceptions, the capsule histories are dry and academic "technese," conveying little of the drama and thrill of wartime aviation. While well laid out, colorful, and attractive, this is not the final word on World War II combat aircraft; several combat aircraft have been omitted. Recommended for World War II history and aviation buffs.?Col. William D. Bushnell, USMC (ret.), Harpswell, Maine
Copyright 1996 Reed Business Information, Inc.

4. THE VITAL GUIDE TO FIGHTING AIRC