Items related to A Tale of Two Cities (Wordsworth Classics) 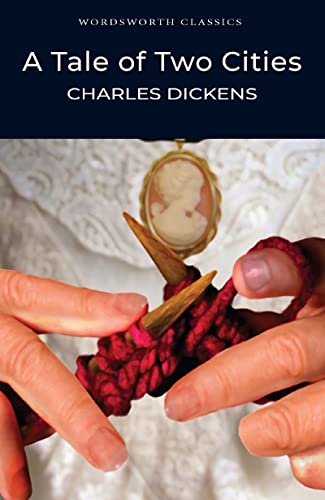 Introduction and Notes by Peter Merchant, Senior Lecturer in English, Canterbury Christ Church University College This novel traces the private lives of a group of people caught up in the cataclysm of the French Revolution and the Terror. Dicken's based his historical detail on Carlyle's "The French Revolution", and his own observations and investigations during his numerous visits to Paris.

The classic, definitive, world-famous Nonesuch Press edition of 1937, finally available again and bound in leather and linen. The text in these stunning volumes is taken from the 1867 Chapman and Hall edition, which became known as the Charles Dickens edition and was the last edition to be corrected by the author himself. The Nonesuch edition contains full-color illustrations selected by Dickens himself, by artists including Hablot Knight Browne ("Phiz"), George Cruikshank, John Leech, Robert Seymour, and George Cattermole.

The Nonesuch Dickens reproduces the original elegance of these beautiful editions. Books are printed on natural cream-shade high quality stock, quarter bound in bonded leather with cloth sides, include a ribbon marker, and feature special printed endpapers. Each volume is wrapped in a protective, clear acetate jacket.

The books are available as individual volumes, or as sets. The six-volume set contains Oliver Twist, Bleak House, Christmas Books, Nicholas Nickleby, David Copperfield, and Great Expectations together with Hard Times. The three-volume set contains A Tale of Two Cities, Little Dorrit, and The Life and Adventures of Martin Chuzzlewit.

With his sublime parting words, "It is a far, far better thing that I do, than I have ever done..." Sidney Carton joins that exhalted group of Dickensian characters who have earned a permanent place in the popular literary imagination. His dramatic story, set against the volcanic fury of the French Revolution and pervaded by the ominous rumble of the death carts trundling toward the guillotine, is the heart-stirring tale of a heroic soul in an age gone mad. A masterful pageant of idealism, love, and adventure -- in a Paris bursting with revolutionary frenzy, and a London alive with anxious anticipation -- "A Tale of Two Cities is one of Dickens's most energetic and exciting works.

2. A Tale of Two Cities (Paperback)

Book Description Wordsworth Editions Ltd, United Kingdom, 1997. Paperback. Condition: New. (Phiz) Hablot K. Browne (illustrator). Language: English. Brand new Book. A Tale of Two Cities (1859), Dickens' greatest historical novel, traces the private lives of a group of people caught up in the cataclysm of the French Revolution and the Terror. Dickens based his historical detail on Carlyle's great work - The French Revolution.`The best story I have written' was Dickens' own verdict on A Tale of Two Cities, and the reader is unlikely to disagree with this judgement of a story which combines historical fact with the author's unsurpassed genius for poignant tales of human suffering, self-sacrifice, and redemption. Seller Inventory # AAZ9781853260391

8. A Tale of Two Cities (Paperback or Softback)

Book Description Paperback. Condition: New. Paperback. With an Introduction and Notes by Peter Merchant, Principal Lecturer in English, Canterbury Christ Church University College. Illustrations by Hablot K. Browne (Phiz). 'A Tale of Two Cit.Shipping may be from multiple locations in the US or from the UK, depending on stock availability. 352 pages. 0.221. Seller Inventory # 9781853260391