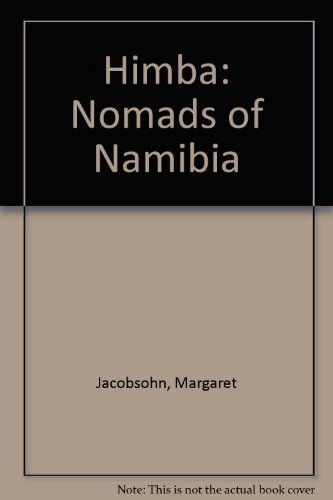 Author Margaret Jacobsohn spent two years among Himba communities, working towards a doctorate in ethno-archaeology and is well equipped to tell their unique story. Jacobsohn's text combines spellbinding stories and real events, documenting a resilient group of people confronted by drought and war. The Himba are semi-nomadic pastoralists who live in Kaokoland in the remote north-western corner of Namibia. Their world is harsh, dry and starkly beautiful, sandwiched between the Namib Deserts forbidding Skeleton Coast and the former conflicts between South Africa and SWAPO. Today these people are under threat as never before. In the early 1980s the worst drought in living memory killed more than 130 000 head of cattle in Kaokoland, two thirds of the stock. Now a 350-km dam is planned, to be located on the Namibian-Angolan border's Kunene River. If plans go ahead, the dam will flood ancestral Himba graves and impact seriously on Himba's socio-economy.

Shipping: US$ 27.27
From United Kingdom to U.S.A.
Destination, rates & speeds