Items related to The Lancaster Story 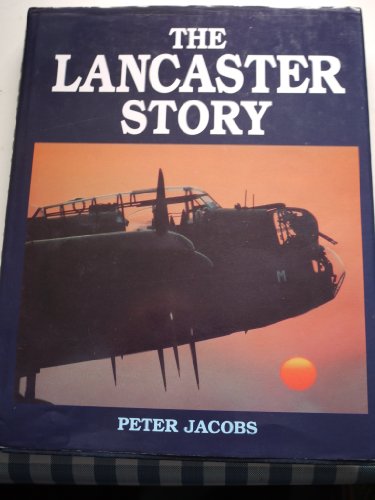 Traces the conception, design, construction, testing and operational history of the Lancaster bomber, showing how it was amended and revised to take on new armaments and meet new strategic demands. This study uses veteran's accounts and manufacturer's archives to provide a full operational history.

Peter Jacobs is a leading authority on the Avro Lancaster Bomber.

Book Description Orion Publishing Co, 1996. Hardcover. Condition: Very Good. Dust Jacket Condition: Very Good. 185409288X Dust jacket condition: Very Good. Very nice and clean. Text free of highlighting and writing. Tightly bound. Few aircraft have featured so prominently in the brief history of military aviation as the Avro Lancaster. Flying its first operations in the spring of 1942, its impact was so great and the job it had to do so important that just three years later the Royal Air Force had 56 squadrons equipped with this sturdy, effective bomber. Its role of honour reads like the history of air bombing - the Dams raid, the daylight attack on Augsburg, the sinking of the battleship Tirpitz and the crippling of the German rocket centre at Peenemunde. The features of the aircraft were carried into various post-war military and civil aircraft, such as the Shackleton, which was still flying in the last decade of the century. And the Lancaster still flies! As a proud member of the RAF Battle of Britain Memorial Flight, it entertains millions of air show visitors each year and so serves to remind us all of the part it played in the Allied victory in World War Two. This deeply researched volume traces the history of the ?Lane? from the drawing board to preservation, including its testing, bombing operations, redesign and function within RAF strategy. Chapter coverage includes: -- Origins -- Development and production -- Design and cockpit environment -- Specialist equipment -- Armament -- The first year at war -- From the Dams to final victory -- At peace once more -- Derivatives -- Flying and maintenance -- For Valour - Lancaster VCs -- In Memoriam. The appendices cover variants, production statistics, squadrons, orders of battle, bases and the principal raids undertaken by Lancasters. More than 200 photographs and diagrams illustrate the text. The Lancaster Story will serve as a fitting tribute to a famous aircraft which, in the hands of devoted air- and ground-crew, performed heroically during a most testing time for British military aviation. 256 pages. Seller Inventory # 071921

Book Description Weidenfeld Military, 1996. Hardcover. Condition: Very Good. Dust Jacket Condition: Very good. Pages clean with images and text bright. No markings. Unclipped dust jacket. WE ARE PROCESSING ORDERS AS NORMAL DURING THIS VIRUS EPIDEMIC, ALL ITEMS ARE SENT BY ROYAL MAIL. DISPATCHED FROM THE UK WITHIN 24 HOURS ( BOOKS ORDERED OVER THE WEEKEND DISPATCHED ON MONDAY) BY ROYAL MAIL. ALL OVERSEAS ORDERS SENT BY AIR MAIL. WE ALSO ACCEPT PAYMENT IN US DOLLARS OR EURO BY BANK TRANSFER. Seller Inventory # mon0000696106

Book Description Paperback. Condition: Very Good. The book has been read, but is in excellent condition. Pages are intact and not marred by notes or highlighting. The spine remains undamaged. Seller Inventory # GOR001815182