Items related to Complete History of Jack the Ripper

Complete History of Jack the Ripper 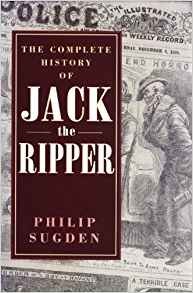 Adding more new material for his Complete History of Jack the Ripper, crime writer and historian Philip Sugden already has painstakingly uncovered much new and hitherto neglected material, including a new Ripper sighting, a possible earlier assault, and a potential American connection. As noted Ripperologist Dan Farson observes, "This is indeed the ‘definitive account'," for armchair sleuths of the White Chapel Horrors and all true crime aficionados. "A meticulous and reasoned profile for readers and future detectives."—Kirkus Reviews "The charm of well written history about a character of almost mythical standing."—Daily Telegraph (London)

A comprehensive account of London's celebrated East End killer, revised and updated. The murders in London between 1888-91 attributed to Jack the Ripper constitute one of the most mysterious unsolved criminal cases. This story is the result of many years meticulous research. The author reassesses all the evidence and challenges everything we thought we knew about the Victorian serial killer and the vanished East End he terrorized.

This exacting book adds a cogent historical investigation to the relatively few intelligent books about the father of all serial killers. Sensationalistic distortion and overimaginative theorizing have been part of this anonymous criminal's history since the first contemporaneous tabloid stories on the Whitechapel murders and continue in the inquiries of modern ``Ripperologists.'' For example, the letter signed ``Yours truly, Jack the Ripper'' that christened the legend was probably a journalist's headline-grabbing forgery, perpetuated in more hoax letters from the Ripper-crazed public. British historian Sugden corrects such myths and errors with donnish competitiveness, spending only a little time dispatching the more bizarre hypotheses (such as the recent Ripper diary hoax, the fanciful implication of the royal family in the murders, and the innumerable post-Victorian pseudo-suspects). Avoiding the penny-dreadful archives of Ripperology, he diligently approaches the voluminous police work and forensic evidence on the ``canonical'' four victims, all prostitutes, and an equal number of possible ones. Drawing on previous research and his own, he reexamines the eyewitnesses' testimony, inquest reports, newspaper accounts, and police leads (and red herrings). Although the material is still compelling and timely after a century, Sugden's sometimes sluggish prose and narrative do not bring to life the panicked atmosphere of the East End or the tensions within the police department. In the end, though many inconsistencies are swept away and many ambiguities left warily intact, Sugden produces an approximate modus operandi around which a convincing psychological profile can be constructed. His examination of suspects exonerates previous favorites, such as Michael Ostrog, whom Assistant Chief Constable Melville Macnaghten called a ``mad Russian doctor''; but with even his preferred suspect, a Polish con man and poisoner, he reaches the verdict ``not proven.'' Sugden's factual treatment of the murders provides a meticulous and reasoned profile for readers and future detectives. (Photos and maps, not seen) -- Copyright ©1994, Kirkus Associates, LP. All rights reserved.

1. The Complete History of Jack the Ripper

Book Description Robinson 12/09/1994, 1994. Hardcover. Condition: Very Good. Shipped within 24 hours from our UK warehouse. Clean, undamaged book with no damage to pages and minimal wear to the cover. Spine still tight, in very good condition. Remember if you are not happy, you are covered by our 100% money back guarantee. Seller Inventory # 6545-9781854873293

3. The Complete History of Jack the Ripper

Book Description Robinson, 1994. Hardcover. Condition: Used; Acceptable. Dispatched, from the UK, within 48 hours of ordering. The book is perfectly readable and fit for use, although it shows signs of previous ownership. The spine is likely creased and the cover scuffed or slightly torn. Textbooks will typically have an amount of underlining and/or highlighting, as well as notes. If this book is over 5 years old, then please expect the pages to be yellowing or to have age spots. Aged book. Tanned pages and age spots, however, this will not interfere with reading. Seller Inventory # CHL5789992

4. The Complete History of Jack the Ripper

Book Description -. Hardcover. Condition: Very Good. The Complete History of Jack the Ripper This book is in very good condition and will be shipped within 24 hours of ordering. The cover may have some limited signs of wear but the pages are clean, intact and the spine remains undamaged. This book has clearly been well maintained and looked after thus far. Money back guarantee if you are not satisfied. See all our books here, order more than 1 book and get discounted shipping. Seller Inventory # 7719-9781854873293

Shipping: US$ 8.72
From United Kingdom to U.S.A.
Destination, rates & speeds