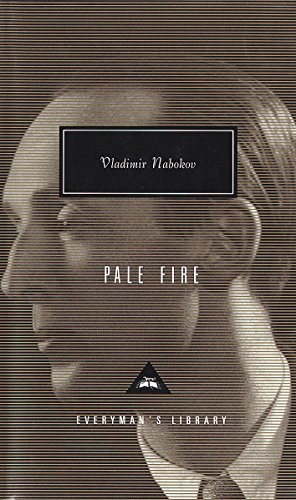 Pale Fire (1962) is a postmodern novel by Vladimir Nabokov. The novel is presented as a 999-line poem titled "Pale Fire", written by the fictional John Shade, with a foreword and lengthy commentary by a neighbor and academic colleague of the poet, Charles Kinbote. Together these elements form a narrative in which both authors are central characters. Pale Fire has spawned a wide variety of interpretations and a large body of written criticism, which Pekka Tammi estimated in 1995 as over 80 studies.[1] The Nabokov authority Brian Boyd has called it "Nabokov's most perfect novel",[2] and the critic Harold Bloom called it "the surest demonstration of his own genius ... that remarkable tour de force".[3] It was ranked at number 53 on the list of the Modern Library 100 Best Novels and number 1 on Larry McCaffery's 20th Century's Greatest Hits: 100 English-Language Books of Fiction.

Like Lolita, Vladimir Nabokov's Pale Fire is a masterpiece that imprisons us inside the mazelike head of a mad émigré. Yet Pale Fire is more outrageously hilarious, and its narrative convolutions make the earlier book seem as straightforward as a fairy tale. Here's the plot--listen carefully! John Shade is a homebody poet in New Wye, U.S.A. He writes a 999-line poem about his life, and what may lie beyond death. This novel (and seldom has the word seemed so woefully inadequate) consists of both that poem and an extensive commentary on it by the poet's crazy neighbor, Charles Kinbote.

According to this deranged annotator, he had urged Shade to write about his own homeland--the northern kingdom of Zembla. It soon becomes clear that this fabulous locale may well be a figment of Kinbote's colorfully cracked, prismatic imagination. Meanwhile, he manages to twist the poem into an account of Zembla's King Charles--whom he believes himself to be--and the monarch's eventual assassination by the revolutionary Jakob Gradus.

In the course of this dizzying narrative, shots are indeed fired. But it's Shade who takes the hit, enabling Kinbote to steal the dead poet's manuscript and set about annotating it. Is that perfectly clear? By now it should be obvious that Pale Fire is not only a whodunit but a who-wrote-it. There isn't, of course, a single solution. But Nabokov's best biographer, Brian Boyd, has come up with an ingenious suggestion: he argues that Shade is actually guiding Kinbote's mad hand from beyond the grave, nudging him into completing what he'd intended to be a 1,000-line poem. Read this magical, melancholic mystery and see if you agree. --Tim Appelo