Items related to The Fires of Heaven

Jordan, Robert The Fires of Heaven 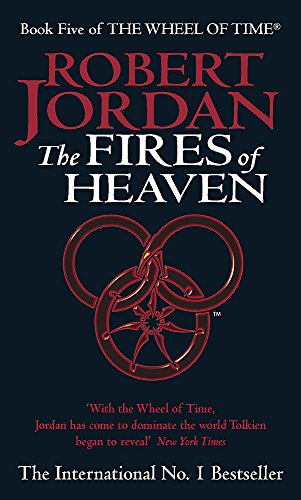 In this sequel to the phenomenal New York Times bestseller The Shadow Rising, Robert Jordan again plunges us into his extraordinarily rich, totally unforgettable world: . ... Into the forbidden city of Rhuidean, where Rand al'Thor, now the Dragon Reborn, must conceal his present endeavor from all about him, even Egwene and Moiraine. ... Into the Amyrlin's study in the White Tower, where the Amyrlin, Flaida do Avriny a'Roihan, is weaving new plans. ... Into Andor, where Siuan Sanche and her companions, including the false Dragon Logain, have been arrested for barn-burning. ... Into the luxurious hidden chamber where the Forsaken Rahvin is meeting with three of his fellows to ensure their ultimate victory over the Dragon. ... Into the Queen's court in Caemlyn, where Morgase is curiously in thrall to the handsome Lord Gaebril. For once the Dragon walks the land, the fires of heaven fall where they will, until all men's lives are ablaze. And in Shayol Ghul, the Dark One stirs....

Robert Jordan was born in 1948 in Charleston. He was a graduate of the Citadel, the Military College of South Carolina, with a degree in physics, and served 2 tours in Vietnam. His hobbies inc. hunting, fishing, sailing, poker, chess, pool and pipe collecting. He died in September 2007.

The Fires of Heaven (Wheel of Time)

Shipping: US$ 61.22
From United Kingdom to U.S.A.
Destination, rates & speeds