Items related to Motorcycles, Merlins and Mosquitos: The Story of Chris... 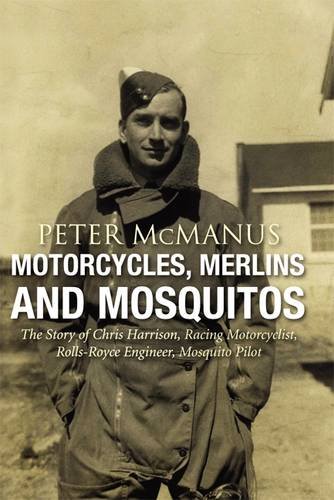 The fascinating tale is a tribute to the remarkable Chris Harrison and all the brave men that flew in the war. Harrison's story will appeal to people interested in war time escapades, motorbikes and aeroplanes. A great story. Chris is a remarkable man, a born engineer with a genius for problem solving. He raced an ex works Norton in the 1930s, worked at Rolls-Royce on aero-engine testing then volunteered for service in the RAF. He commenced flying in America but was diverted to Packards, Detroit, to help with Merlin engine manufacture before finally completing his flying training. Back in England he flew Mosquito night fighters over Occupied Europe...and survived! In 1953 Rolls-Royce opened a branch in Australia to service the Royal Australian Air Force turbo- jet engines and Chris moved to Australia.He rode a motorcycle until he was 90, still drives a car and continues to work on vintage motorcycles. It features a plethora of fascinating motorcycles of the 1920s - 1930s. - About the AuthorPeter McManus is a lifelong motorcycle enthusiast who started aged 16 in 1939 riding a 1930 175cc Triumph two-stroke...and still has one! He is not a born- again motorcyclist as he never died in the first place! Having served his engineering apprenticeship in Derby he then joined Rolls-Royce technical staff immediately after the war where he met Chris Harrison.

Shipping: US$ 10.12
From United Kingdom to U.S.A.
Destination, rates & speeds