Lefebvre, Henri Critique of Everyday Life, Volume III: From Modernity to Modernism (Towards a Metaphilosophy of Daily Life)

Critique of Everyday Life, Volume III: From Modernity to Modernism (Towards a Metaphilosophy of Daily Life) 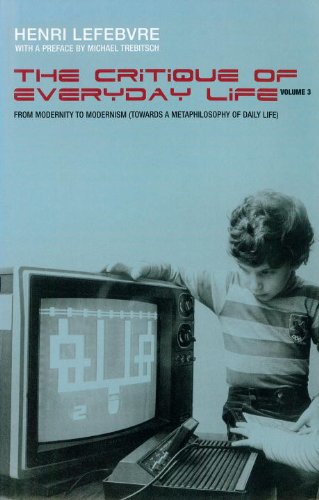 The Critique of Everyday Life is perhaps the richest, most prescient work by one of the twentieth century’s greatest philosophers. A historian and sociologist, Lefebvre developed his ideas over seven decades through intellectual confrontation with figures as diverse as Bergson, Breton, Sartre, Debord and Althusser.

Written at the birth of postwar consumerism, though only now translated into English, the Critique is a book of enormous range and subtlety. Lefebvre takes as his starting point and guide the “trivial” details of quotidian experience: an experience colonized by the commodity, shadowed by inauthenticity, yet which remains the only source of resistance and change. Whether he is exploring the commercialization of sex or the disappearance of rural festivities, analyzing Hegel or Charlie Chaplin, Lefebvre always returns to the ubiquity of alienation, the necessity of revolt. This is an enduringly radical text, untimely today only in its intransigence and optimism.

This third volume of the Critique of Everyday Life completes Lefebvre’s monumental project. It seeks to shed light on changes inscribed within everyday life, and at the same time to reveal certain virtualities of the everyday, taking into account the crisis of modernity but also the decisive assertion of technological modernism.

Henri Lefebvre (1901–1991), former resistance fighter and professor of sociology at Strasbourg and Nanterre, was a member of the French Communist Party from 1928 until his expulsion in 1957. He was the author of sixty books on philosophy, sociology, politics, architecture and urbanism.

Gregory Elliott is a member of the editorial collective of Radical Philosophy and author of Althusser: The Detour of Theory and Labourism and the English Genius: The Strange Decay of Labour England?.

“One of the great French intellectual activists of the twentieth century.”—David Harvey

1. Critique of Everyday Life, Volume III: From Modernity to Modernism (Towards a Metaphilosophy of Daily Life)