Items related to From Handel to Hendrix: The Composer in the Public...

Chanan, Michael From Handel to Hendrix: The Composer in the Public Sphere

From Handel to Hendrix: The Composer in the Public Sphere 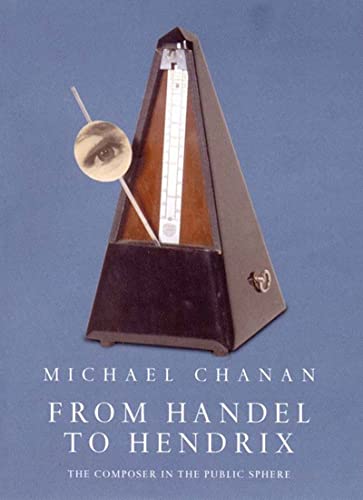 In this book, a continuation of Michael Chanan’s investigation of the relation between music and society, the author examines the composer in the light of Jurgen Habermas’s study of the public sphere. Taking his cue from the German philosopher’s remarks about the bourgeois concert audience, the emergence of criticism and the development of autonomous music, Chanan examines the fate of the composer through successive incarnations, from Handel, Bach and Mozart in the eighteenth century by way of Beethoven, Liszt, Wagner, Mahler and Debussy in the nineteenth, to Schoenberg, Stravinsky, Bartok, Gershwin, Weill, Ellington, Cage and Boulez in the twentieth.

Drawing upon recent work in feminist and gay musicology, the book ranges over themes such as subjectivity and identity in Schubert and Chopin, the ascendancy of the Romantic personality, the lure of the exotic in Milhaud’s work, and the political economy of music.

A detailed history of the idea of the composer as a public figure, Chanan’s book charts both the dramatic change in the listening audience and, simultaneously, the composer’s progressive marginalization from the centre of musical life.

“It is undoubtedly true, as the music critic Hans Keller used to observe, that more people nowadays hear a single broadcast of a new work by an avant-garde composer than would have heard all Beethoven’s symphonies in his own lifetime. But the effects are not only quantitative; they also include radical alterations in the relationship between the audience and the object of aesthetic consumption, which seriously affect the situation of the composer, whose audience may now be wider and larger, but also becomes ever more fragmented and anonymous.”

Michael Chanan is a filmmaker, writer and teacher. He has written books on various aspects of film and music, including Repeated Takes, The Dream that Kicks and The Cuban Image.

Praise for Michael Chanan's previous books: "[Repeated Takes] is elegant and impressively well-informed ... [Chanan] has a strong grasp of the way different musical cultures - different 'musics' - from Machaut to Maderna, Tin Pan Alley to dub reggae, have adapted themselves to the revolution they have been caught up in, and been changed by it." - London Review of Books "Bristling with details... [Repeated Takes] attempts to reconcile the various strands of its subject - the recording industry and the genres it has fostered or transformed - and to make sense of them." - New Statesman & Society "One of the real strengths of [Musica Practica] is its refusal to limit itself merely to the consideration of classical music ... a weighty tome, but well worth the effort." - BBC Music

1. From Handel to Hendrix: The Composer in the Public Sphere

2. From Handel to Hendrix: The Composer in the Public Sphere