Items related to THE LAST DAYS OF HITLER : The Legends, the Evidence,...

Anton Joachimsthaler THE LAST DAYS OF HITLER : The Legends, the Evidence, the Truth

THE LAST DAYS OF HITLER : The Legends, the Evidence, the Truth 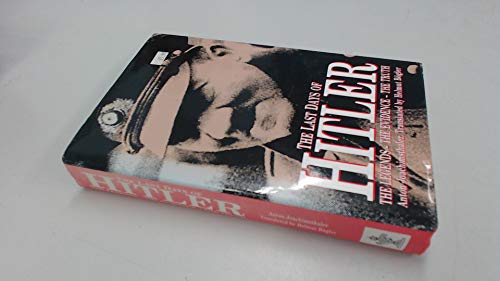 Despite thousands of pages of evidence made public after inquiries into Hitler's death at a German federal court that lasted from 1952 to 1956, mysteries surrounding the Fuehrer's final hours continue to intrigue and puzzle many. Time is running out for one last attempt to assess the eyewitness evidence, but this expert has interviewed most of the still-living witnesses who testified at the inquiry and has examined records from Russia that were unavailable in the 1950s. The result is a careful re-examination of the state of the bunker, the corpses found at the site, the evidence of gunshots and of suicide, the attempts to make identification difficult, and the all-important dental records.

I found the book to be quite good and objective regarding the facts surrounding Hitler's death. I, for one, thought that Hitler had bitten a prussic acid ampoule as well as shooting himself at the same time. The author presents very well thought out facts as to why this did not occur and that he shot himself only. He makes excellent use of eyewitness testimony (Linge and Gunsche). I find nothing to criticize about the author's analysis. I do agree that the last chapter about Eva Braun and Hermann Fegelein is a bit out of place. But, in the end, it was interesting. --By Jerry Wilt

It is a more objective book (compilation) then the others on the subject of Hitler's last days in the Bunker. This book offers a careful re-examination of the evidence; it seeks and corrects many of the numerous myths and inaccuracies. It includes testimony given by bunker eyewitnesses in the West German Federal Court proceeding as to Hitler's death that lasted from 1952 to 1956. Further, the highlights of the Bavarian Criminal Investigation Office report is included along with much discussion of the different versions of Hitler's gunshot wound. The book is highly footnoted and has a lengthy bibliography. However, the last chapter (8) should be noted as it discusses Eva Braun and SS General Fegelein's friendship. Most authors and witnesses agree a friendship was present between the two but the author here adds speculation and surmise that it may have been more. The chapter is not convincing as to that hypothesis and is a weak spot in an otherwise good book. I should add, that Hitler's secretary Christa Schröder stated in her memoirs, "HE WAS MY CHIEF: The Memoirs of Adolf Hitler's Secretary", that there was a platonic love affair between Eva Braun and Hermann Fegelein but it did not go any further. The author (because of when the book was written) did not know all the pieces of the puzzle as to what happened to Hitler's remains after the Soviets found them. For readers who want to know all the details of what happened to the remains of Hitler, Braun, and the Goebbels' (and how they were disposed of) then I would recommend the following books: "Hitler's Death: Russia's Last Great Secret from the Files of the KGB" by V.K. Vinogradov (even though that book is only made up of the incomplete early SMERSH investigation) and the Editors' Afterword chapter of "The Hitler Book" Edited by Henrik Eberle and Matthias Uhl. Lastly, it should be noted, Sir Ian Kershaw (the acclaimed historian) relied on Joachimsthaler's work in both his 2000 book, "Hitler 1936-1945 - Nemesis" and his 2008 book, "Hitler: A Biography". In the detailed footnotes of his former work, Kershaw, for example, states on page 1038, "This and what follows is based on Joachimsthaler, chs.5-7, the most reliable and detailed examination...of Hitler and Eva Braun. --By C. B. Miller

1. THE LAST DAYS OF HITLER : The Legends, the Evidence, the Truth

2. THE LAST DAYS OF HITLER : The Legends, the Evidence, the Truth

3. THE LAST DAYS OF HITLER : The Legends, the Evidence, the Truth [Hardcover] Anton Joachimsthaler and Helmut B??gler