Items related to Mona In the Promised Land

Mona In the Promised Land 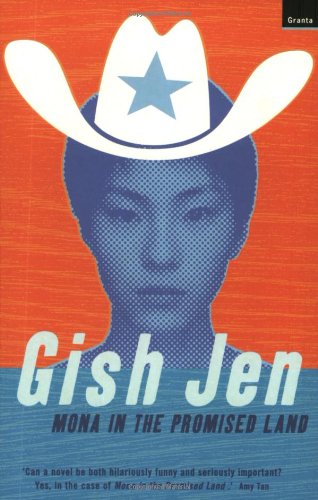 The heroine of Mona in the Promised Land is a true child of the suburbs. Mona--a self-described "self-made mouth" goes to temple, loves pickles, is boy-crazy, worries about getting into the right college and keeping up with her over-achieving sister, and wishes her parents were less strict. Her equally Jewish Westchester classmates hardly notice what everyone else finds hard to forget: Mona may be Jewish by choice (and voice) and American by nationality, but her surname is Chang and so she is considered less an expert on seders and schmaltz than China.

In Gish Jen's hands, '70s suburbia is a place of buoyant hope and change. While Mona's parents worry about what she'll do next--her mother suggesting at one point that she might even want to be black, Mona ripostes that that's not a religion. She does, however admit to knowing "some kids studying to be Bobby Seale. They call each other brother, and eat soul food instead of subs, and wear their hair in the baddest Afros they can manage." The divide between past conservatism and present bohemia is one of the novel's concerns, but its epigraphs hint at the porous nature of cultural identity, of groups taking what they choose from one another. As for Gish Jen, she turns out to be a descendant of Laurence Sterne. Mona has the buttonholing narrator, the rollicking comedy that modulates into genuine sadness, and the incidental but all-important details that might confuse those intent on the author's ethnicity but will delight everyone else.

In this ebullient and inventive novel, Gish Jen restores multiculturalism from high concept to a fact of life. At least that's what it becomes for teenaged Mona Chang, who in 1968 moves with her newly prosperous family to Scarshill, New York, where the Chinese have become "the new Jews." What could be more natural than for Mona to take this literally--even to the point of converting? As Mona attends temple "rap" sessions and falls in love (with a nice Jewish boy who lives in a tepee), Jen introduces us to one of the most charming and sweet-spirited heroines in recent fiction, a girl who can wisecrack with perfect aplomb even when she's organizing the help in her father's pancake house. On every page of Mona in the Promised Land, Gish Jen sets our received notions spinning with a wit as dry as a latter-day Jane Austen's.

"A shining example of a multicultural message delivered with the wit and bite of art...Gish Jen creates a particular world where dim sum is as American as apple pie."--Los Angeles Times

1. MONA IN THE PROMISED LAND