Edward Allhusen London Railways1897 Map: The railway network that helped to make London the greatest city in the world.

London Railways1897 Map: The railway network that helped to make London the greatest city in the world. 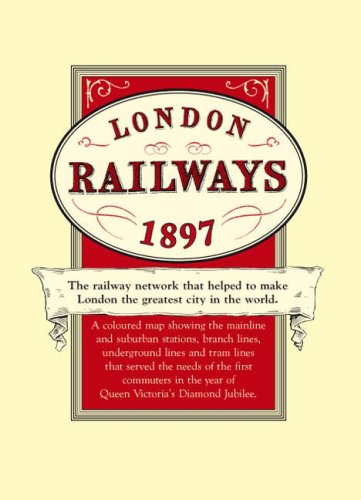 A colored map of London and its suburbs showing branch lines, underground lines, tram lines and the mainline and suburban stations that served the needs of the first commuters in the year of Queen Victoria's Diamond Jubilee. Each map has a booklet describing the development of London's railways before 1897 as well as current and future plans.
Of all the great innovations of the nineteenth century it was the railways that contibuted the most. In London new railway lines ran to the docks where ships were discharging previously unseen raw materials from an Empire that straddled the globe. By rail these goods could be dispersed all over the country to factories and towns with rapidly increasing populations. London, the hub of the Empire, had become the world's greatest commercial center and, for the first time, people were able to live in the healthier suburbs and travel to the city to work. The Vistorians were passionate railway builders both underground and overground and all the outlying towns, long since devoured by the metropolis, were connected to the great termini by remarkable engineering feats that involved tunnels, cuttings, embankments, bridges and viaductsall of which were constructed by manual laborers.
This map shows what they achieved and when they had finished London had the finest railway network in the world at a time when you could set your clock by a passing steam train.

1. London Railways1897 Map: The railway network that helped to make London the greatest city in the world.