Emergency Maneuver Training : Controlling Your Airplane During a Crisis 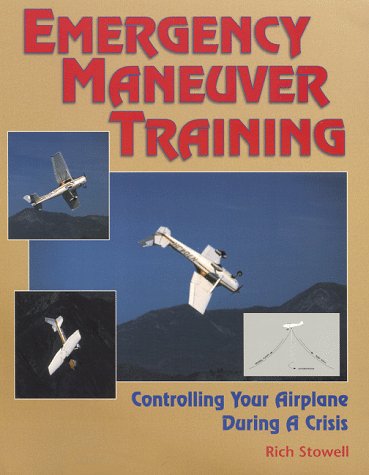 Award-winning flight instructor and aviation video host Rich Stowell has condensed eight years and 2,000+ hours of experience teaching recoveries from spins and other unusual attitudes into a 240-page manual sprinkled with 128 illustrations.

Stowell unravels such perennial aviation mysteries as the intricate relationship between pitch and power, the significance of the V-g Diagram, the real cause of spins, the behavior of wingtip vortices, and the human factors influencing aeronautical decision-making. In the process, the reader learns simplified emergency strategies to cope with a host of in-flight maladies, including: spins and spirals, inverted attitudes, wake turbulence, control failures, and engine failures.

The timely information in this book is applicable to pilots at all levels of experience.

The Definitive Work on an Important Subject

A common sense treatment of many of the questions left unanswered during flight training, in one easy-to-read book! Learn emergency strategies that have been taught to military and civilian pilots around the world, from the instructor who developed the EMT(r) Program--the leading edge in emergency maneuver training technology since 1987.

Discover: The intricate relationship between pitch & power, airspeed & altitude; which control surface turns an airplane; the significance of the V-g diagram; what really causes a spin; how wingtip vortices behave; how to handle a control failure; how stress affects pilot performance; the critical sequence of events needed to recover from various unusual attitudes.

Learn: How the airplane's attitude can negatively influence pilot perceptions; the difference between spirals, stalls, & spins; how to avoid wake turbulence; how to maximize the probability of surviving a forced landing; trademark procedures such as PARE(r), Power--Push--Roll(tm), Speed--Spot--Set-Up(tm), and many more!

A noted authority on unusual attitude training, Rich Stowell has given over 2,600 hours of spin, emergency maneuver, and aerobatic instruction since 1987. His experience includes performing 12,000+ instructional spins -- the equivalent of over 550 vertical miles traveled while spinning! He also developed the FAA Part 141-approved training course outline for the EMT(c) - Emergency Maneuver Training - Program.

Rich has hosted several critically acclaimed aviation videos, has written numerous articles for Flight Training, Plane & Pilot, and Sport Aerobatics magazines, and has authored two informative textbooks: PARE(r) - The Emergency Spin Recovery Procedure, and Emergency Maneuver Training. He is currently working on his third book, Stall/Spin Awareness, due in 1999. Rich also maintains the Aviation Learning Center, an interactive Internet web site specializing in all-attitude training resources. An active Aviation Safety Counselor since 1992, Rich continues to present safety seminars across the U.S. and Canada, and has traveled to Indonesia and Japan to conduct spin and aerobatic training clinics and flight demonstrations for military and civilian pilots.

For his contributions to aviation safety and education, Rich received the FAA's Western-Pacific Region Flight Instructor of the Year Award in 1993, the International Aerobatic Club (IAC) President's Award in 1994, and the Van Nuys FSDO Aviation Safety Counselor of the Year Award in 1996. He has also earned Phase IV Wings through the FAA's Wings Program and his Basic, Sportsman, and Intermediate with Stars through the IAC's Achievement Awards Program.

1. Emergency Maneuver Training : Controlling Your Airplane During a Crisis

2. Emergency Maneuver Training : Controlling Your Airplane During a Crisis

4. Emergency Maneuver Training : Controlling Your Airplane During a Crisis

6. Emergency Maneuver Training : Controlling Your Airplane During a Crisis