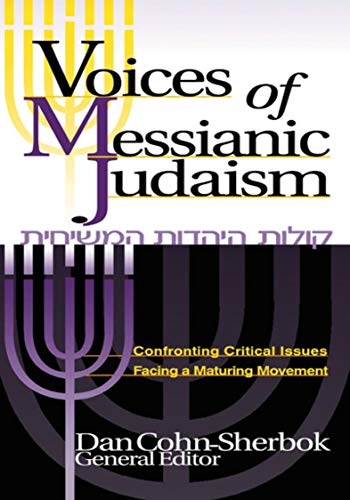 Here is a collection of substantive articles compiled to focus discussion on some weighty matters facing the Messianic Jewish movement. Reform rabbi, Dr. Dan Cohn-Sherbok, though not a Messianic Jew, is a friend of the movement. He believes that Messianic Judaism may be considered a branch of Judaism in this century. Professor of Judaism at the University of Wales, author of over 30 books, Rabbi Cohn-Sherbok guided the selection of topics addressed in this book. Here are some examples:

* Should Jewish believers in Messiah attend only Messianic Jewish congregations?

* Is intermarriage acceptable for Messianic Jews?

* Should liturgy have an essential role in congregational worship?

* How should outreach be accomplished?

Many of the best minds impacting this movement have contributed their thoughts to this book, creating a lively, informative, discussion. Each author, expressing his or her own view on a topic (often in direct opposition to another author), is a voice that can help this maturing movement confront the critical issues facing it.

Someone said, "Where you have three Jews, you have at least four opinions." But this is not just a book of opinions. Voices of Messianic Judaism is a book of substantive articles compiled to focus discussion on some weighty matters facing the Messianic Jewish movement. Reform rabbi, Dr. Dan Cohn-Sherbok, himself not a Messianic Jew, is a friend of the movement. He believes that Messianic Judaism may be considered a branch of Judaism in the 21st century, especially if it wrestles with these Jewish issues. Professor of Judaism at the University of Wales, author of over 30 books, Rabbi Cohn-Sherbok guided the systematic selection of the thirteen topics addressed in this book. Here are some examples:

-Should Jewish believers in Messiah attend only messianic congregations?

-Is intermarriage acceptable for Messianic Jews?

-Where do Gentiles figure in the future of Messianic Judaism?

-Should liturgy have an essential role in this movement?

-How much Jewish tradition should be part of the lives of Jewish believers?

Many of the best minds impacting this movement have contributed their thoughts to Voices of Messianic Judaism, creating a lively, informative, important book:

Each author, expressing his or her own view on a topic (often in direct opposition to another author), is a voice that can help this maturing movement confront the critical issues facing it.

From the Introduction by Dan Cohn-Sherbok, General Editor

Growing up in the leafy suburbs of Denver, Colorado, it was my intention ever since I was a little boy to become a Reform rabbi. This desire amazed everyone. My father was a successful surgeon. Why, my parent's friends asked, did their son not want to follow in his footsteps? Being a rabbi, they said, was not a job for a nice Jewish boy. Undeterred, I went to Williams College in Williamstown, Massachusetts, and later studied for five years at the Hebrew Union College in Cincinnati, Ohio. During this time, I served as a student rabbi in congregations in Jasper, Alabama; Galesburg, Illinois; Harrisburg, Pennsylvania; and Boulder, Colorado. After ordination, I was a Reform rabbi in Melbourne, Australia before beginning studies at Cambridge University for a doctorate. During my time at Cambridge, I served as a rabbi at the West London Synagogue, and later in Johannesburg, South Africa.

Although I had anticipated that congregants would listen in hushed silence to my sermons and attend study courses, it did not turn out that way. To my astonishment, I discovered that being a rabbi was not at all what I had expected. Services were sparsely attended; hardly anyone came to the courses I offered. In one of my congregations, the parking lot was packed on bingo night at the Temple, but only a few came to synagogue to pray. In another congregation, I was expected to dress up for a fashion show, or play tennis with women members at the Jewish country club. Eventually I decided I could take no more, and I became an academic, first at the University of Kent in Canterbury, England, and now at the University of Wales where I am a Professor of Judaism. During these years, I have written books on a wide variety of Jewish topics, many which deal with modern Jewish life.

Several years ago, my wife and I were writing a book, The American Jew, a study of the nature of American Judaism based on a single Jewish community. In the process of our research, we heard about the Messianic movement. One of those who spoke to us was an opponent of Messianic Judaism. At length, he recounted what he perceived as the iniquities of the movement. "Messianic Jews," he declared, "are deceptive and deliberately attempt to hide their true intentions. Although they claim to be Jewish in their approach, in fact they are nothing more than Christians in disguise."

Intrigued, my wife and I contacted a local Messianic Jewish rabbi. His congregation was located in an industrial warehouse on the outskirts of the city. The sanctuary had an Ark, which contained a Torah scroll, and there was a purple curtain with an embroidered Star of David hanging in front of the Ark. The bookcases in the rabbi's office were full of Hebrew Texts, and a large photograph of the Walling Wall hung over his desk. The rabbi wore a skullcap, and was anxious to explain about the history and nature of Messianic Judaism.

In the 19th century, he said, a small group of Jews proclaimed their faith in Jesus. Referred to as Hebrew Christians, they saw themselves as fulfilling their Jewish heritage by embracing the Messiah in their lives. Throughout the 20th century, Hebrew Christianity grew in strength, but it was only in the l960s that notice was taken of these Jewish Christians. In recent decades, a new form of messianic faith has emerged out of these earlier subgroups within the Jewish community.

Messianic Judaism, he went on, is a movement of Jews who, like the Hebrew Christians, believe that Jesus, whom we call Yeshua, is the promised Messiah. In the view of Messianic Jews, Messianic Judaism differs from all other branches of Judaism in relying solely on the Hebrew Scriptures. Their faith is biblical Judaism; centered around the Messiah and the worldwide salvation he brings. Messianic Jews are convinced that they have access to God because of the atoning work of Messiah Yeshua, who has fulfilled them as Jews.

Showing us around his synagogue, he explained that Messianic Jews are one in spirit with Gentile followers of Jesus. Yet, Messianic Jews have their own expression of faith in the Messiah. Messianic Judaism asserts that it is Jewish to believe in Yeshua—this, they contend, is a return to the Jewish roots of the faith. As a result Messianic Jews observe the biblical feasts and holidays while maintaining that the only route to salvation is through the atoning work of Yeshua.

Adherents of this new movement insist they are not Christians. In our view, he continued, the term Christian originally meant "follower of Christ." Yet, over time, the connotations of the term have changed. Unlike Gentile believers in Christ, Messianic Jews do not wish to separate themselves from their Jewish roots. They believe that they have found the Jewish Messiah and are now completed Jews in that Yeshua is the fulfillment of biblical Judaism. Yeshua never intended to start a new religion. Rather, he came to correctly explain the law and the prophets. . .