Items related to Song of Susannah (The Dark Tower, Book 6) 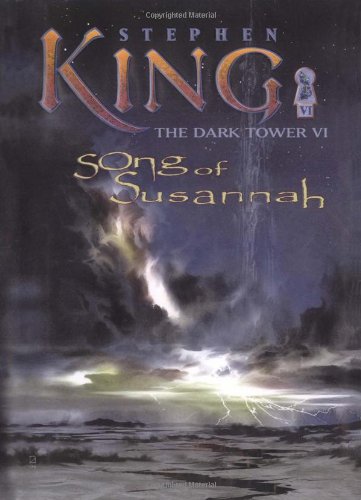 While Jake, Father Callahan, and Oy struggle to free Susannah Dean, whose body is possessed by a demon-mother named Mia, Roland and Eddie find themselves swept by magic to East Stoneham, Maine, in the summer of 1977, where they encounter a terrifying and dangerous worold, one inhabited by the author of a novel called 'Salem's Lot. 700,000 first printing.

Stephen King is the author of more than fifty books, all of them worldwide bestsellers. Among his most recent are Full Dark No Stars, Blockade Billy, Under the Dome, Just After Sunset, the Dark Tower novels, Cell, From a Buick 8, Everything's Eventual, Hearts in Atlantis, The Girl Who Loved Tom Gordon, Lisey's Story and Bag of Bones. His acclaimed nonfiction book, On Writing, was recently re-released in a tenth anniversary edition. King was the recipient of the 2003 National Book Foundation Medal for Distinguished Contribution to American Letters, and in 2007 he was inducted as a Grand Master of the Mystery Writers of America.  He lives in Maine with his wife, novelist Tabitha King.

There's something about a crippled, black, schizophrenic, civil rights activist-turned-gunslinger whose body has been hijacked by a white, pregnant demon from a parallel world that keeps a seven-volume story bracingly strong as it veers toward its Armageddon-like conclusion. When Susannah Dean is transported via a magic door on the outskirts of Calla Bryn Sturgis (the scene of much of The Dark Tower V: Wolves of the Calla) to New York City in the summer of 1999, the "demon-mother" who possesses her, Mia, has only one thing on her mind. She must give birth to her "chap" at a predetermined location in Manhattan's East 60s, as instructed by the henchmen-or "Low Men"-of the evil Crimson King. Pressed for time, Father Callahan, preteen Jake and talking pet "billy-bumbler" Oy follow Susannah and Mia's trail in an effort to prevent an act that would quicken the destruction of the Dark Tower and, in turn, of all worlds. Meanwhile, gunslingers Roland and Eddie travel to 1977 Maine in search of bookstore owner Calvin Tower, who is being hunted down by mobster Enrico Balazar and his gang, who first appeared in Eddie's version of New York in The Drawing of the Three Avid readers of the series will either be completely enthralled or extremely irritated when, in a gutsy move, the author weaves his own character into this unpredictable saga, but either way there's no denying the ingenuity with which King paints a candid picture of himself. The sixth installment of this magnum opus stops short with the biggest cliffhanger of King's career, but readers at the edge of their seats need only wait a few short months (Dark Tower VII: The Dark Tower) to find out how-and if-King's fictional universe will come to an end. 10 full-color illus. not seen by PW.
Copyright © Reed Business Information, a division of Reed Elsevier Inc. All rights reserved.