Items related to U.S. Intelligence and the Nazis

U.S. Intelligence and the Nazis 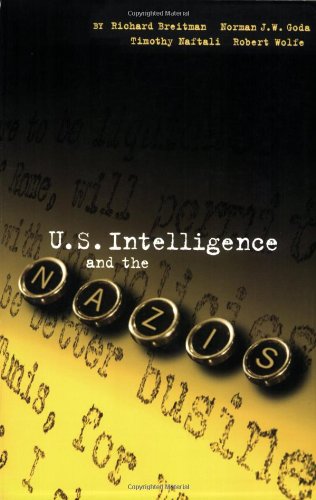 U.S. Intelligence and the Nazis discusses hundreds of the 8 million-plus documents released under the Nazi War Crimes Disclosure Act by the CIA, FBI, NSA, Army, State Department, and other U.S. agencies. This book contains a great deal of new information about the world of intelligence, especially concerning the postwar use of war criminals by U.S. intelligence organizations. It also sheds new light on Holocaust issues, showing, for example, that the Allies had knowledge of the genocide earlier than historians previously believed. By using these newly released documents to refine what was previously understood about World War II, the Holocaust, and intelligence activities during and after the war, the authors demonstrate the historical, cultural, and moral importance of the declassified information.

This book is a direct result of the 1998 Nazi War Crimes Disclosure Act. Drawing upon many documents declassified under this law, the authors demonstrate what US intelligence agencies learned about Nazi crimes during World War II and about the nature of Nazi intelligence agencies' role in the Holocaust. At a time when intelligence successes and failures are at the center of public discussion, U.S. Intelligence and the Nazis also provides an unprecedented inside look at how intelligence agencies function during war and peacetime.

Richard Breitman, professor of history at American University, is the author of Official Secrets: What the Nazis Planned, What the British and Americans Knew and a number of other books. He serves as editor of the scholarly journal Holocaust and Genocide Studies, and he has been director of historical research for the Interagency Working Group.

Norman J.W. Goda is an associate professor of history at Ohio University. His publications include Tomorrow the World: Hitler, Northwest Africa, and the Path toward America, as well as numerous journal articles. He is currently completing Tales from Spandau: Diplomacy, Symbolism, and the Nuremberg War Criminals 1947-1987. He received his Ph.D. in European History from the University of North Carolina.

Timothy Naftali, an associate professor at the University of Virginia, is director of the Presidential Recordings Program and Kremlin Decisionmaking Project at the Miller Center of Public Affairs. His book reviews on intelligence history appear in various publications, including the New York Times and the Los Angeles Times.

Robert Wolfe was the senior reference specialist for more than thirty years for the National Archives's massive captured German and World War II war crimes trial records, as well as for the records of the postwar occupation of Germany and Austria. His publications include Americans as Proconsuls: U.S. Military Government in Germany and Japan, 1944-52 and Captured German and Related Records.

1. U.S. INTELLIGENCE AND THE NAZIS