Items related to California: Views by Robert Adams of the Los Angeles... 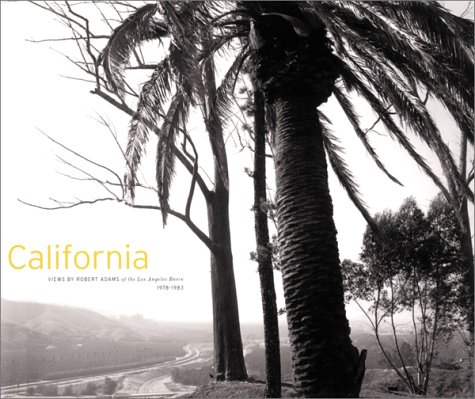 Since the 1960's, Robert Adams has used his camera lens to document the changing landscape of the United States. Covering the turbulent period from 1978 to 1983, Robert Adams' photographs of the Los Angeles basin document a disintegration that is at once social and ecological. At the same time, however, they reveal a persistent verdancy and vitality in the landscape that contains a glimmer of hope. This hope that Adams shares with the viewer is much like the hope held out at the end of a classical tragedy--insistent, yet difficult to account for. In California we find a bird in a defoliated orchard, a suddenly clear day on a quiet road, the astonishing silhouette of a eucalyptus in smog--and we are left wondering how to explain these seemingly unreal moments.The images here constitute yet another chapter in the oeuvre of one of the most important landscape photographers of our time, building on and communicating with Adams' continuing contribution to the national dialogue about America's health and future--as well as his monumental contribution to contemporary photography. Printed in stunning tritones, this new monograph features a revelatory introduction by former United States Poet Laureate Robert Hass.

About Robert Adams's pictures in California:
"There is an oddly touching quality here that is hard to define, but shining and recurrent. Adams's gift is occasionally akin to Atget's: both so cherish the scruffiest and dullest corners of existence that their frankly tender scrutiny transmutes their subjects."
-Vicki Goldberg, American Photographer.

"What Adams achieves is a poetry of depradation...A weariess of view fuses with the freshness of radiant seeing, as if Robert Frank's vision of a fifties America had blended with the imagery of Carleton Watkins's post-Civil War Yosemite."
-Max Kozloff, American Art.

"The pictures have an idiosyncratic beauty, and they serve as partial solace for the disharmonies they depict."
-Andy Grundberg, The New York Times.

Robert Adams was born in 1937, educated in California, and taught English at the university level for nearly a decade. He has spent the succeeding thirty years as a photographer. His numerous books include The New West (1974), From the Missouri West (1980), Los Angeles Spring (1986), To Make it Home (1989), Listening to the River (1994), West from the Columbia (1995), What We Brought (1995), and Notes for Friends (1999). Adams has been awarded the Guggenheim and MacArthur foundation fellowships for his photography. For his current project he is photographing the clearcuts of Oregon. Robert Hass is the author of several books of poems, including "Human Wishes" and "Sun Under Wood", and a book of essays, "Twentieth Century Pleasures". His translations of Japanese poetry appear in "The Essential Haiku: Versions of Basho, Busson and Issa". From 1995 to 1997, he served as the US Poet Laureate, and he teaches at the University of California at Berkeley.

"What a landscape photographer traditionally tries to do is show what is past, present, and future at once. You want ghosts, and the daily news and prophecy."-Robert Adams