Items related to How To Eat To Live, Book 1

Muhammad, Elijah How To Eat To Live, Book 1 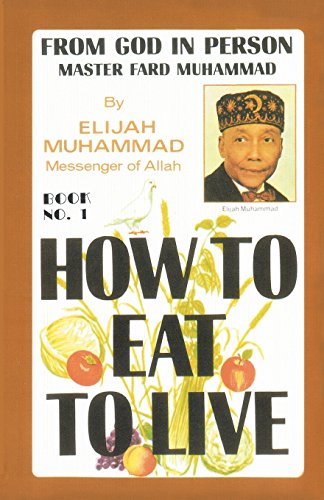 For more than 30 years, messenger Elijah Muhammad has been teaching the so-called Negroes of America on the proper foods to eat to improve their mental power, physical appearance, for prevention of illness, curing of ailments and prolonging life. Given the humble, economic conditions of the blacks in America, an inexpensive, yet highly nutritional diet was given to them by Elijah Muhammad. Before the health craze that has swept the country, Elijah Muhammad and the Nation of Islam were head of the curve as far back as the early 30's. This is the first of two books written with this simple, yet revolutionary way of eating.

Elijah Muhammad was born on October 7, 1897 in Sandersville, Georgia. He met his teacher, Master Fard Muhammad in Detroit, Michigan after migrating there in the early 1930's. Upon the departure of his teacher, Elijah Muhammad became the Leader, Teacher and Guide of what went from The Lost-Found Nation of Islam in North America to what is known today as the Nation of Islam. Notable students of the Messenger were Malcolm X Little, later named Malik El Shabazz, Cassius Clay, also named Muhammad Ali, and Louis Wilcox, later named Louis Farrakhan. Given the profoundity of the writings of Elijah Muhammad, it would be an injustice to attempt to put it in a small synopsis; therefore pasting this link in your browser and visiting http://www.memps.com, will render the best and most accurate information available about Messenger Elijah Muhammad.

5. How to Eat to Live: From God in Person, Master Fard Muhammad: Vol 1