Items related to The Good Book and the Big Book: A.A's Roots in...

B., Dick The Good Book and the Big Book: A.A's Roots in the Bible

The Good Book and the Big Book: A.A's Roots in the Bible 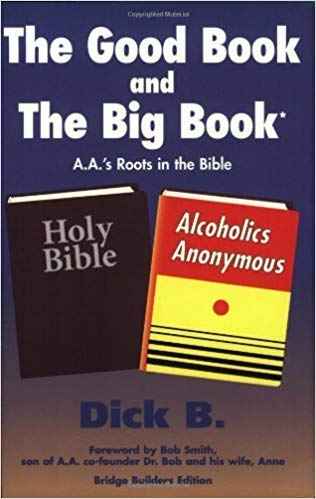 The very first, and the most popular study of A.A.'s roots in the Bible. A.A. co-founder Dr. Bob had often stated during his lifetime that the basic ideas of A.A. were taken from their study of the Bible. So too that the Book of James, the sermon on the mount, and 1 Corinthians 13 were absolutely essential to the early program. He said that the answers to their problems were in the Good Book (as he called the Bible). This book explores every observable source and appearance of Bible ideas in the Big Book which Bill Wilson wrote four years after A.A. was founded. It has become a regular shelf item among those who believe in God, understand the importance of the Bible, diligently seek to apply the teachings of Jesus Christ in the march to sobriety and a life of love of service thereafter. The book is a page-turner for those who, like the author at first, had never realized the specific sources of A.A. in the Bible, and the specific Bible language in A.A.'s basic text, talks, and literature of the early days.

"An astounding seventy-five to ninety-three percent of the early members of Alcoholics Anonymous recovered from their seemingly hopeless disease of alcoholism. They did it by relying on God and by basing their relationship with Him on the principles of the Bible. This comprehensive history discusses the biblical sources from which A.A.'s founders said they obtained their recovery ideas--focusing particularly on the Sermon on the Mount, 1 Corinthians 13, and the Book of James. For many AAs, the Bible was the standard of truth upon which they could depend for the power and guidance that they needed in their lives. Author Dick B.--an active, recovered member of A.A., a Bible student, and a sponsor of over seventy men in their recovery--here shows how a knowledge of A.A.'s Good Book roots can be used effectively to produce a high recovery rate in today's Twelve Step programs."

"The Bible and the 'Big Book' of Alcoholics Anonymous are not mutually exclusive, as the author, Dick B., carefully shows. The A.A. book which has helped millions with their addictions is deeply indebted to, and profoundly influenced by, biblical language, images, and themes gleaned directly from the Bible or indirectly from Bible teachers like Rev. Samuel Shoemaker, E. Stanley Jones, and Oswald Chambers. A.A. has received much from biblical Christianity, and biblical Christians can receive much from Dick's new book about spiritual growth and victorious living." (Rev. Charles B. Puskus, Jr., Ph.D., Author, An Introduction to the New Testament)

"We use Dick's book in all our counselor training centers. It is an invaluable resource." (Jean LaCour, Ph.D., Dean, The N.E.T. Training Institute, Florida)

"We're excited to have this book for scholars of A.A. that explains A.A.'s roots in the Bible!" (Ozzie and Bonnie L., Managers, The Wilson House, East Dorset, Vermont)

"Anyone seeking to learn the spiritual roots of Alcoholics Anonymous will find Dick B.'s publication, The Good Book and the Big Book, an invaluable resource. Dick has done a monumental job of finding and documenting the prime sources of A.A.'s life-renewing power." (John F. Seiberling, former United States Congressman, and son of Henrietta Seiberling, an early A.A. "founder.")

Author Dick B. (1925-2015) was a writer; an "unofficial" historian of A.A.; a retired attorney; a Bible student; and active, recovered AA who has sponsored more than 100 men in their recovery. He devoted more than 25 years of his life to researching, reporting, and disseminating early A.A. history and successes. He had published 46 titles and more than 1,750 articles on A.A. history. Clergy, scholars, historians, and old-timers in A.A. have often called Dick B. the leading A.A. historian today.

Buy Used
Condition: Good
. A copy that has been read but... Learn more about this copy

1. The Good Book and the Big Book: A.A's Roots in the Bible

Book Description Paradise Research Pubns. Condition: Good. . A copy that has been read but remains intact. May contain markings such as bookplates, stamps, limited notes and highlighting, or a few light stains. Seller Inventory # L18I-00508

2. The Good Book and the Big Book: A.A's Roots in the Bible

Book Description Paradise Research Pubns, 1995. Condition: Good. A+ Customer service! Satisfaction Guaranteed! Book is in Used-Good condition. Pages and cover are clean and intact. Used items may not include supplementary materials such as CDs or access codes. May show signs of minor shelf wear and contain limited notes and highlighting. Seller Inventory # 1885803052-2-4