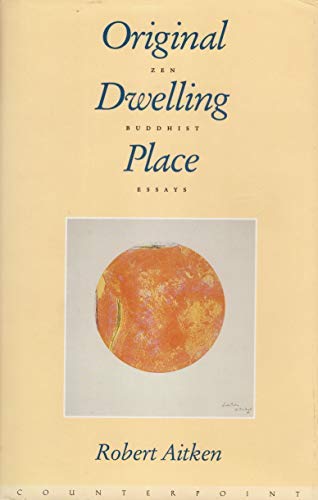 Just as Taking the Path of Zen is the definitive handbook for Zen practice, the essays gathered in Original Dwelling Place are essential for the light they shed on Aitken Roshi's own journey and the effect he has had on American Zen Buddhism. Gathered here are essays about the Zen texts Aitken has studied with avidity and close attention throughout the years, texts that were early and lasting influences. In an opening section entitled "Ancestors," Aitken pays homage to the masters who influenced his own development and Zen Buddhism generally.
In other meditations, Robert Aitken writes on political revolution and matters of ethics. He helps illuminate the proper use of money, power, and sexual love in a modern world that is often tainted by materialism and decadence. He reflects on death, on marriage, and on Zen practice, always pointing out the path to pleasure in the everyday "dewdrop" world.

Aitken, the first American Zen Roshi (master) and, since 1959, a teacher at the Diamond Sangha in Hawaii, continues to be one of the most articulate American presenters of Zen Buddhism. This collection of some of his previously published essays clearly shows why he has this reputation. In the first section, entitled "Ancestors," Aitken offers a marvelous look into his own spiritual development as he recalls some of the important things about his early teachers. In the second section, "The Classical Discourses," Aitken discusses three important Zen texts, including the Brahma Viharas, or "Four Noble Attitudes of Conduct." Though the texts may be unfamiliar to many, Aitken provides enough background to lead even the casual reader to a deeper understanding of their meaning and their importance in Zen. In the remaining two sections, "Practice" and "Taking Pleasure in the Dharma," Aitken discusses such diverse topics as koans, marriage, money, and "Wallace Stevens and Zen." A marvelous, wide-ranging collection; recommended for public and academic libraries.?David Bourquin, California State Univ., San Bernardino
Copyright 1996 Reed Business Information, Inc.

In this collection of essays and meditations spanning the years 1980^-95, Robert Aitken--senior American Zen master, scholar, and translator--examines and often reexamines texts and topics closest to his heart and teaching: death, marriage, ritual, the guidance and mystery of nature, facing and accepting our inevitable suffering as human beings, and the importance of zazen (sitting meditation) in linking "the body, brain, spirit, and will." Aitken is a master of archetype and metaphor, offering the Westerner everyday counsel on the uses of money or the damaging effects of gossip and manipulation, followed by more lofty admonishment to the Zen student to give up the path of reason for the path of poetry. Rounding out these diverse selections are Aitken's reminiscences of his teachers' lives and words and his ongoing comments on engaged Buddhism, in its activities of social justice and conservation, reminding us that in Buddhism human beings are not a special class of beings. Penny Spokes