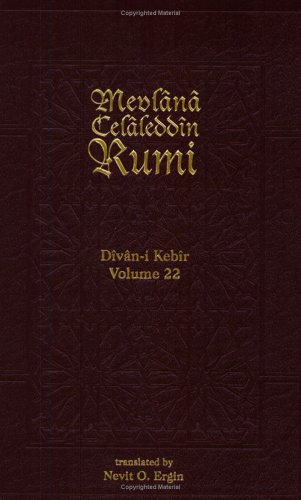 Meter 22 of the 22 meters of Mevlana Jalaluddin Rumi's masterpiece, the Divan-i Kebir, translated into English in its entirety for the first time.

The Divan-i Kebir, or Divan-i Shams is the anthology of Rumi's poems from the time he met Shams (1244) until the day he died (1273). Although Shams disappeared from Rumi's life after only three years, the impact of this Saint and Master transformed Rumi's life into one of self-annihilation, spiritual longing and ecstasy, all clearly reflected in his poetry.

Rumi's poetry is recorded in 13th century Farsi, the language of the times in Anatolia (some Arabic, Turkish and Greek also appears). Rumi did not write down his poetry. Rather, he spontaneously recited poems day and night, and assigned people, called katib-i esrar [secret secretary], surrounded and followed him, recording what he said.

These more than 44,000 verses are beautiful explanations of the secret of life, Love, humanity, God, and more. They also serve as historical sketches of 13th Century life in Konya, Anatolia. And, they take the reader into the spiritual journey Rumi took 800 years ago toward the enlightenment of Love. For more information, visit ReadingRumi.com.

Echo Publications is the publishing arm of the Society for Understanding Mevlana. The purpose of our existence is to bring the beauty and wisdom of Rumi to the public through different media.

We accepted this challenge many years ago. It has been a difficult, but beautiful journey. The language the Divan was written in is 13th Century Farsi, spoken in Anatolia. There is a small number of gazelles written in Arabic, Turkish and even Greek. The CD of this original Divan will be given free of charge to scholar’s and persons interested when purchasing the whole set of the Divan.

There is an inherent danger in Rumi’s poems. They dazzle the eyes with their poetic beauty, so that one cannot see their prophetic messages. His works have an undeniably sacred value for some people. I am certainly one of them. I believe early exposure of young minds to his concepts of unselfishness, tolerance, and love will not only solve the present personal and social problems, but also prevent future catastrophes.

Mevlana is the strongest unifying power in our badly divided world. Centuries old problems have reached the most dangerous level, and are asking for an urgent solution. Millions are looking at each other as an enemy rather than as one of the same of God’s creatures. It is difficult to expect much from old self serving systems and technologies. Those are partially responsible for that division. Blind riders with a blind horse are not only a danger to themselves, but also a serious threat to their surroundings.

Then Mevlana comes in with unity, love, tolerance, and unselfishness. He shows us where the problem is, and how to solve it. This is the reason for his surging popularity.

"Self’ is the big curse of mankind. Who could show a better way out of this curse than Mevlana?

Book Description Echo Publications, 2003. Condition: Good. A+ Customer service! Satisfaction Guaranteed! Book is in Used-Good condition. Pages and cover are clean and intact. Used items may not include supplementary materials such as CDs or access codes. May show signs of minor shelf wear and contain limited notes and highlighting. Seller Inventory # 1887991247-2-4