Items related to The Long March: How the Cultural Revolution of the...

Kimball, Roger The Long March: How the Cultural Revolution of the 1960s Changed America

The Long March: How the Cultural Revolution of the 1960s Changed America 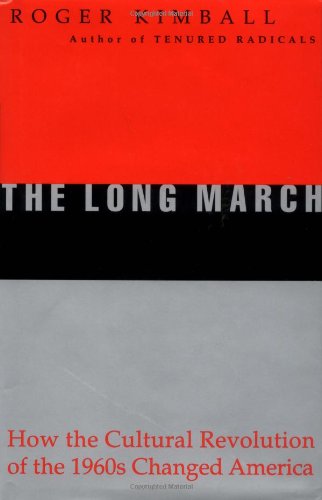 In The Long March, Roger Kimball, the author of Tenured Radicals, shows how the "cultural revolution" of the 1960s and '70s took hold in America, lodging in our hearts and minds, and affecting our innermost assumptions about what counts as the good life. Kimball believes that the counterculture transformed high culture as well as our everyday life in terms of attitudes toward self and country, sex and drugs, and manners and morality. Believing that this dramatic change "cannot be understood apart from the seductive personalities who articulated its goals," he intersperses his argument with incisive portraits of the life and thought of Allen Ginsberg, Norman Mailer, Timothy Leary, Susan Sontag, Eldridge Cleaver and other "cultural revolutionaries" who made their mark. For all that has been written about the counterculture, until now there has not been a chronicle of how this revolutionary movement succeeded and how its ideas helped provoke today's "culture wars." The Long March fills this gap with a compelling and well-informed narrative that is sure to provoke discussion and debate.

The 1960s, writes Roger Kimball, "has become less the name of a decade than a provocation." This incisive critique of that turbulent time won't calm the debate. The Long March will enthrall conservatives who think of themselves as culture warriors and infuriate liberals who still celebrate "the purple decade." Kimball, managing editor of the New Criterion and author of Tenured Radicals, is one of the Right's most articulate writers. He argues forcefully that the pernicious influence of the 1960s can still be felt: "The success of America's recent cultural revolution can be measured not in toppled governments but in shattered values. If we often forget what great changes this revolution brought in its wake, that, too, is a sign of its success: having changed ourselves, we no longer perceive the extent of our transformation."

The Long March proceeds as a series of stimulating essays on important cultural figures and movements, beginning with the Beats. Norman Mailer comes in for an eloquent trashing ("From the late 1940s until the 1980s, he showed himself to be extraordinarily deft at persuading credulous intellectuals to collaborate in his megalomania"), as do any number of counterculture icons. I.F. Stone's articles, writes Kimball, "read like neo-Stalinist equivalents of those multipart articles on staple crops with which The New Yorker used to anesthetize its readers." And of The New York Review of Books, that bastion of elite liberal opinion, Kimball says: "Quite apart from the irresponsibility of the politics, there was an intellectual irresponsibility at work here, a preening, ineradicable frivolousness toward the cultural values that the journal was supposedly created to nurture." There's a distinctly conservative crankiness to Kimball's writing; the jazz of Miles Davis is inevitably "drug-inspired" and rock music "was not only an aesthetic disaster of gigantic proportions: it was also a moral disaster whose effects are nearly impossible to calculate precisely because they are so pervasive." Yet this inclination can lead to fascinating, if arguable, insights about modern American culture: "Everywhere one looks one sees the elevation of youth--that is to say, of immaturity--over experience. It may seem like a small thing that nearly everyone of whatever age dresses in blue jeans now; but the universalization of that sartorial badge of the counterculture speaks volumes."

Kimball's writing is at once highbrow and accessible. Fans of Robert Bork's Slouching Towards Gomorrah and Allan Bloom's The Closing of the American Mind--or readers who have never quite believed all the English professors proclaiming Allen Ginsberg a poetic genius--will find The Long March engrossing and indispensable. --John J. Miller

"How deeply rooted are our nation's cultural problems? What is the legacy of the 1960s? Where are America's culture wars going? Few people take these important questions more seriously than Roger Kimball. And few write about them with such clarity and eloquence."--William J. Bennett

"The extent of the cultural revolution we have lived through since the Sixties is still not clear to us, nor is its meaning. Roger Kimball has produced a searching and comprehensive study that brings it alltogether, high and low, from Herbert Marcuse to Monica Lewinsky. His well-told story is equal to the amazing event. It shows the routinization of exciting ideals, and the power and impotence of ideas."--Harvey C. Mansfield

"Roger Kimball is among our most intelligent, thoughtful, and provocative cultural critics. He also is uncommon in that he writes lucidly and persuasively."--Irving Kristol --

1. The Long March: How the Cultural Revolution of the 1960s Changed America

2. The Long March: How the Cultural Revolution of the 1960s Changed America

3. The Long March: How the Cultural Revolution of the 1960s Changed America Kimball, Roger