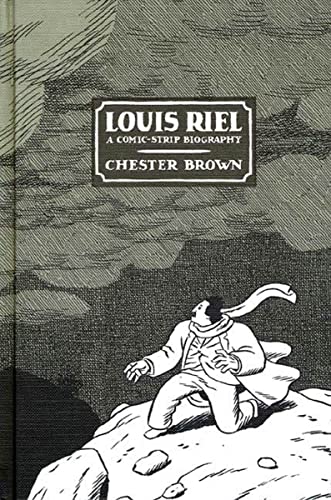 Martyr or Madman? The Passionate Rebel History Can't Close The Book On.

Is this the future of comics? Respectably penning the dowdy pages of history? Don't be fooled. This is one of the hippest comics going and will be a controversial must-have in 2003. Legendary cartoonist Chester Brown reveals in the dusty closet of Canadian history there are some skeletons that won't stop rattling. To some Louis Riel was one of the founding fathers of a nation but to others he was a murderer who nearly tore a country apart. A man so charismatic he was elected to government twice while in exile with a prize on his head--but so impassioned his dramatic behavior cast serious doubts on his sanity. Riel took on the army, the government, the Queen, and even the Church in the name of freedom. Will Riel's visionary democracy ever be enough to defend him from the verdict of history?

About the Author:
Chester Brown is one of the pioneers of the 1980s comix renaissance. He was born in 1960 in Montreal but lives today in Toronto.
From Publishers Weekly:
Brown's exploration of the life of a [...] 19th-century Canadian revolutionary Riel is a strong contender for the best graphic novel ever. Over five years in the making, Brown's work is completely realized here, from the strikingly designed two-color cover to the cream-colored paper and pristinely clear drawings. The story begins in 1869, with the sale of the independent Red River Settlement area of what's now Canada to the Canadian government. The area is inhabited by the French-speaking Metis, of mixed Indian and white ancestry, who are looked down upon by the Canadians. Riel is bilingual and becomes a de facto leader for the Red River Settlement, demanding the right for them to govern themselves within Canada. Not surprisingly, this request is denied, and the conflict is set in motion that ultimately consumes Riel's life. Brown doesn't deviate from a six-panel grid for the entire book, telling his story in a cartoon realism style reminiscent of Little Orphan Annie. And while the book concerns imperialism, empire, nationalism and the chaos that results, Brown maintains a still, almost silent atmosphere. He brilliantly renders a lengthy courtroom sequence by setting figures against a black background, heightening the tension of the events by employing minimal effects. Even the battle scenes are subdued. All of this will hook readers' minds and eyes, but never tell them what to think or feel. Instead, Brown calmly lets his story unfold, making the reading process deeply affecting. This is an ingenious comic and a major achievement.
Copyright © Reed Business Information, a division of Reed Elsevier Inc. All rights reserved.