Items related to Pyongyang: A Journey in North Korea

Pyongyang: A Journey in North Korea 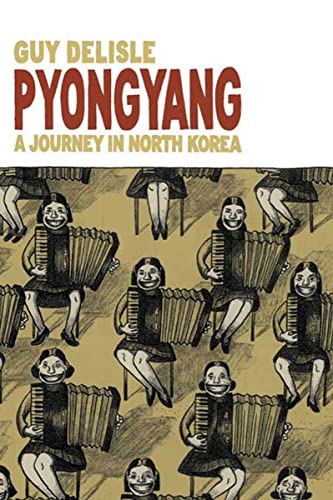 A westerner's visit into North Korea, told in the form of a graphic novel.

Famously referred to as one of the "Axis of Evil" countries, North Korea remains one of the most secretive and mysterious nations in the world today. In early 2001 cartoonist Guy Delisle became one of the few Westerners to be allowed access to the fortresslike country. While living in the nation's capital for two months on a work visa for a French film animation company, Delisle observed what he was allowed to see of the culture and lives of the few North Koreans he encountered; his findings form the basis of this remarkable graphic novel. Pyongyang is an informative, personal, and accessible look at a dangerous and enigmatic country.

Guy Delisle was born in Quebec City in 1966 and has spent the last decade living and working in France. He has written and drawn four graphic novels, including Shenzhen, an account of his travels to China. Pyongyang is his first in English.

In 2001, French-Canadian cartoonist Delisle traveled to North Korea on a work visa to supervise the animation of a children's cartoon show for two months. While there, he got a rare chance to observe firsthand one of the last remaining totalitarian Communist societies. He also got crappy ice cream, a barrage of propaganda and a chance to fly paper airplanes out of his 15th-floor hotel window. Combining a gift for anecdote and an ear for absurd dialogue, Delisle's retelling of his adventures makes a gently humorous counterpoint to the daily news stories about the axis of evil, a Lost in Translation for the Communist world. Delisle shifts between accounts of his work as an animator and life as a visitor in a country where all foreigners take up only two floors of a 50-story hotel. Delisle's simple but expressive art works well with his account, humanizing the few North Koreans he gets to know (including "Comrade Guide" and "Comrade Translator"), and facilitating digressions into North Korean history and various bizarre happenings involving brandy and bear cubs. Pyongyang will appeal to multiple audiences: current events buffs, Persepolis fans and those who just love a good yarn. (Sept.)
Copyright © Reed Business Information, a division of Reed Elsevier Inc. All rights reserved.

1. Pyongyang: A Journey in North Korea

2. Pyongyang: A Journey in North Korea

3. Pyongyang: A Journey in North Korea

6. Pyongyang: A Journey in North Korea