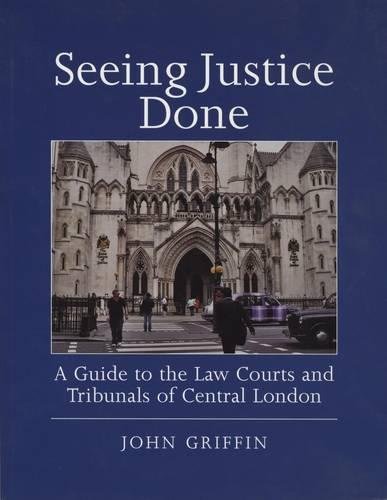 Seeing Justice Done is aimed at students and overseas lawyers, and at everyone with the time and inclination to visit the Law Courts and Tribunals of Central London as a spectator. The book describes where each of them is to be found, and what goes on inside them. Prominent lawyers explain the difference between barristers and solicitors, and there are eighteen interviews with individuals involved, willingly or unwillingly, in what lawyers call the administration of justice, ranging from a High Court Judge to a persistent criminal. This book is about people; the people who work in the courts and tribunals, and the people who appear in them. The Judge, the Foreman of the Jury, the Prosecutor, the Accused, the Defence Junior, the Solicitor, the Policeman, the Court Artist, and the Taxi Driver, all give their personal insight into how thing are done. However, nobody could possibly write about London's law courts without devoting at least a couple of pages to that astonishing extravaganza of Victorian gothic madness, the Royal Courts of Justice. The author also finds space to include items on court dress and behaviour. He relates two contrasting examples of contempt. The first, quoting from Megarry's Miscellany at Law, of a law report of 1631, written in the debased law French used in law reports at that time, concerns a defendant who `ject un brickbat a le dit Justice que narrowly mist & pur ceo immediately fuit Indictment drawn per Noy envers le prisoner, son dexter namus ampute & fix al Gibbet sur que luy mesme immediatement hange in presence de court'. The second, a more recent case of a female witness who extracted from a paper parcel a dead cat, and threw it, inaccurately at the judge. This time there was no amputation, no hanging. The judge merely remarked `Madam, if you do that again, I shall commit you for contempt'.

John Griffin was born and educated in South London, long enough ago to remember the London Blitz and the V1 flying bombs. He practised as a "High Street" solicitor in Southampton until his retirement. He continues to sit part-time as a tribunal chairman. He is a Director of the Solicitors Benevolent Association, trying - in Shaun Wallace's words - to "give something back".

1. Seeing Justice Done : A Guide to the Law Courts and Tribunals of Central London

Book Description Condition: Very Good. Ships from the UK. Former library book; may include library markings. Used book that is in excellent condition. May show signs of wear or have minor defects. Seller Inventory # GRP104666248

Shipping: US$ 6.95
From United Kingdom to U.S.A.
Destination, rates & speeds

Book Description Condition: Good. Your purchase helps support Sri Lankan Children's Charity 'The Rainbow Centre'. Ex-library, so some stamps and wear, but in good overall condition. Our donations to The Rainbow Centre have helped provide an education and a safe haven to hundreds of children who live in appalling conditions. Seller Inventory # Z1-G-030-01125