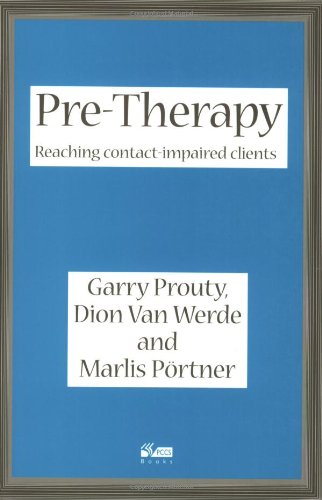 Developed by Garry Prouty and his associates over a period of 30 years, Pre-Therapy is a method for anyone wanting to work with people whose ability to establish and maintain psychological contact is imparied temporarily or permanently, by illness or injury, whether organic or psychological in origin. This book presents the most complete and up-to-date formulation of Pre-Therapy philosophy, theory and practice. Applications of the method with the most difficult client groups - those described with severe psychosis and others with profound learning disabilites - are illustrated by all three authors, with detailed accounts from Dion Van Werde and Marlis Portner. Pre-Therapy has changed the practice of psychologists, psychiatrists, psychotherapists, social workers, counsellors and carers in mainland Europe; now this book introduces its revolutionary ideas to English-speaking readers.

Garry Prouty was the founder of Pre-Therapy. He lectured in European clinics, hospitals and training organisations for nearly 20 years, and delivered the Frieda Fromm-Riechian Memorial Lecture at the Washington School of Psychiatry. Marlis Portner worked as a psychologist and psychotherapist in private practice, and as a consultant for staff members of various social care organizations in Europe. Dion Van Werde is a psychologist with a postgraduate specialisation in Client-Centered/Experiential Psychotherapy (K. U. Leuven). He is Pre-Therapy Staff Fellow of the Chicago Counseling and Psychotherapy Center, USA. He is coordinator of the Pre-Therapy International Network, based at Psychiatrisch Ziekenhuis, St Camillus, Gent, Belgium, where he uses Pre-Therapy as a ward model in residential care for people diagnosed as psychotic. He also gives presentations and workshops on Pre-Therapy in different formats and languages.

Shipping: US$ 37.46
From United Kingdom to U.S.A.
Destination, rates & speeds