Items related to The Accentual History of the Japanese and Ryukyuan...

Moriyo Shimabukuro, University Of Ryukyus The Accentual History of the Japanese and Ryukyuan Languages (Languages of Northern and Central Eurasia) 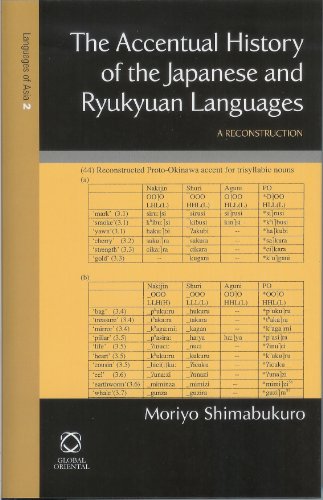 Moriyo Shimabukuro is Associate Professor at The University of the Ryukyus, in Okinawa, Japan. He received his Ph.D. in Linguistics from The University of Hawai’i at Manoa and has been teaching at The University of the Ryukyus since 2002. His major research interests are historical linguistics, phonology (especially suprasegmental phenomena), the English language, and the languages of Japan.
Alexander Vovin, Professor of East Asian Languages at the University of Hawai’i at Manoa, has published extensively on Japanese, Ainu, Korean and Tungusic, as well as other languages of East and Inner Asia. Among his major works are A Reconstruction of Proto-Ainu (Brill, 1993), A Reference Grammar of Classical Japanese Prose (RoutledgeCurzon, 2003) and Nihongo Keitoron no Genzai/Perspectives on the Origins of the Japanese Language (co-edited with Osada Toshiki, the International Center for Japanese Studies, Kyoto, 2003).

1. The Accentual History of the Japanese and Ryukyuan Languages: A Reconstruction (Hardback)

Book Description Brill, United Kingdom, 2007. Hardback. Condition: New. Language: English. Brand new Book. This book looks into the accentual history of the Japanese and the Ryukyuan languages. Applying the comparative method, the author has reconstructed the accentual history of the Japonic languages. The reconstruction is based on modern dialects of Japanese and Ryukyuan, and also on historical materials. The investigation of 'natural accent changes' has allowed the author to formalize rules for accent change. Using these rules, the developments of the accent systems of descendant dialects or languages are explained. The development of typologically different accent systems is also explored. Seller Inventory # TNP9781901903638