Hylton, Raymond Ireland's Huguenots and Their Refuge, 1662-1745: An Unlikely Haven 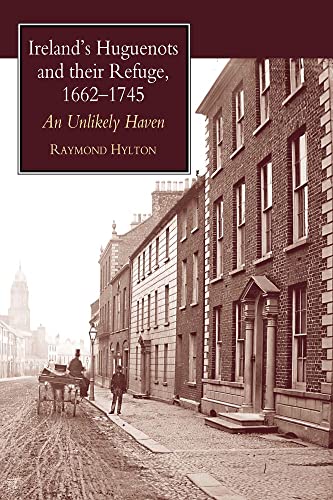 Of the nearly 200,000 Huguenots whose consciences compelled them to leave France during the 17th and 18th centuries, some 10,000 chose to settle in that most unlikely of refuges-Ireland. The story of why and how these most ardent of Protestant believers found themselves in this most fervently Catholic of islands is one of history's great paradoxes. This book explores this question and attempts to reveal precisely who these Huguenots were, what they contributed to and received from their adopted land, and why Huguenot ancestry is so respected and prized even among devout Irish Catholics. The true chronicle of Ireland's Huguenots is, in opposition to the narrow misrepresentations of the past, one of extraordinary richness and variety, as befits an ethnic group whose influence permeated every nook of Irish life and society.

“Hylton highlights the key issues that hindered the development of a cohesive Huguenot community in Ireland. . . . He renders a valuable service by situating Ireland’s Huguenot refugees within a wider context. . . . Hylton’s care in recounting these incidents along with his detailing of the Huguenot role in the Protestant ascendancy in Ireland ensure that both specialist and nonspecialist readers can glean important insight from the text. Hylton’s work also demonstrates that genealogical interests can coexist with the concerns of professional historians.”  —Journal of British Studies